Home › The F.N. Sharp Guide to the Best Cuts of Steak

There are some people who become giddy with the latest iPhone release and those who swoon over designer shoes and handbags. And then there are those of us whose heartbeat quickens at the mere mention of a juicy, marbled steak.

If you belong to that last category, there’s a good chance most (if not all) of the good steaks you’ve devoured in your lifetime have been in restaurants. That’s because, while eating steak is ridiculously easy (granted you have the right steak knives), choosing the best cuts and cooking it yourself… not so much.

This guide is about to change that.

How to Choose and Cook the Best Cuts of Steak

From the perfectly marbled ribeye to the lean and tender filet mignon, we’re going to explore some of the best cuts of steak. But first, let’s make sure we’re all on the same page with a quick rundown on what steak is and where it comes from.

What is a Steak? 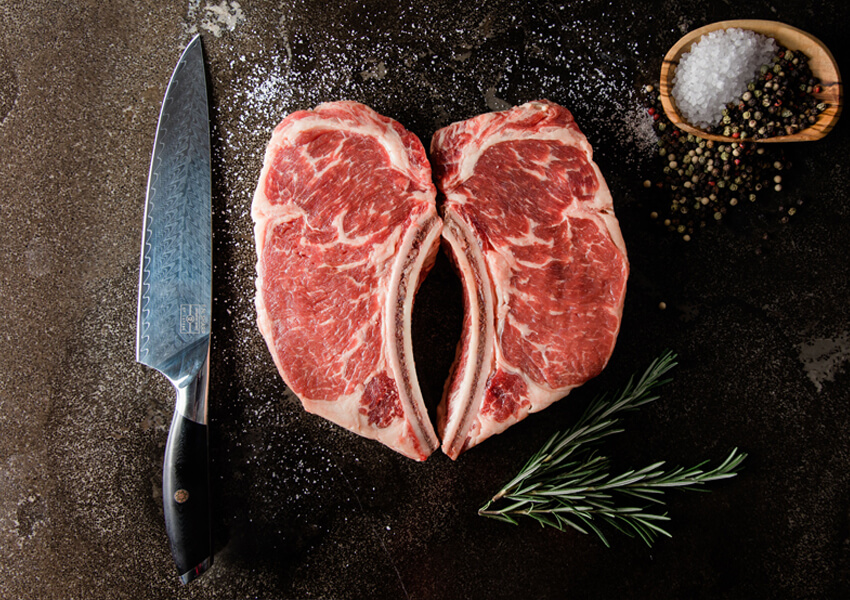 We all might know how to order steak, but what exactly is it? A steak is simply a slice of meat cut from the fleshy part of a beef carcass. While pork chops may loosely be defined as a type of steak (along with tuna), for this post we’re going to focus solely on beef steaks.

More on Meat: The F.N. Sharp Guide to Different Cuts of Pork

In order to fully grasp steak (I wouldn’t mind grasping one right now), you’ve got to envision where it comes from. The shoulder area of the cow is what gives us the tasty beef chuck, and down a ways you get the delectable brisket. Now, while these cuts offer up a lot of connective tissue that gives you tons of flavor when braised and melted, cooked any other way will give you a chewy steak.

Most of the steaks you know and love come from a bit further back on the cow, starting near the upper mid-section and moving down to the hind quarters. For instance, just past the shoulder area is the rib section of the cow which gives us the prime rib roast, as well as the ribeye steak – one of our personal faves that is wonderfully marbled and very tasty.

More on Prime Rib: The Best Prime Rib Recipe and How to Carve It

Directly behind the rib section is the loin, which is where you’ll get the most tender steak cuts. It’s not as marbled and flavorful as your rib section, but many people prefer these tender cuts of steak such as the tenderloin, the T-bone, and the porterhouse.

Making our way further back on the cow, we come to the sirloin area. These are your less tender and cheaper cuts of meat, although sirloin steaks are still very tasty.

And finally, you have the round section, which is the hind leg of the cow. Some of these steaks can be quite flavorful, but they are less tender than even your sirloin steaks. Common cuts from this section are top round, bottom round and eye of round steaks.

So What are the Best Cuts of Steak?

Now that you’ve gotten the rundown on the different beef cuts, let’s really dig in and talk about some of the most common cuts of steak and how to select and cook them.

The Porterhouse vs. The T-Bone 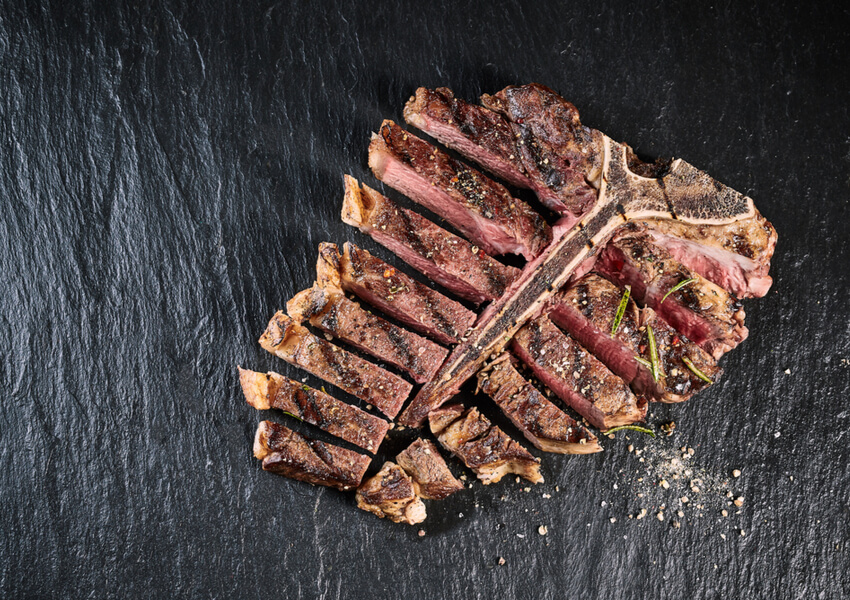 A lot of people get the T-Bone and porterhouse steaks confused. As mentioned before, both of these steaks come from the loin area, and they both have a “T-shaped” bone with meat on each side.

Since both of these steaks are really made up of two separate steaks, the tenderloin and the strip, let’s talk about those next.

Sink Your Teeth into the T-Bone With This Recipe: T-Bone Steak & Potatoes With Espagnole Sauce

The tenderloin steak is sometimes also called the filet mignon or Châteaubriand if you’re French and fancy. Tenderloins are the most expensive cuts of steak and are sold boneless. They’re also usually cleaned completely of any silver skin, gristle and fat. Because they’re on the smaller side, tenderloins are usually cut thicker than most steaks.

While the tenderloin is the most tender of steaks, it also is the leanest. This gives it a mild flavor, as compared to say, a ribeye. You must take care when cooking tenderloins because they’re lacking in fat. Generally, you can give it a quick sear on all sides, then finish cooking in the gentle, even heat of an oven for the best results. Some chefs wrap the tenderloin in bacon to impart some fat and more flavor – and really, everything’s better with bacon. 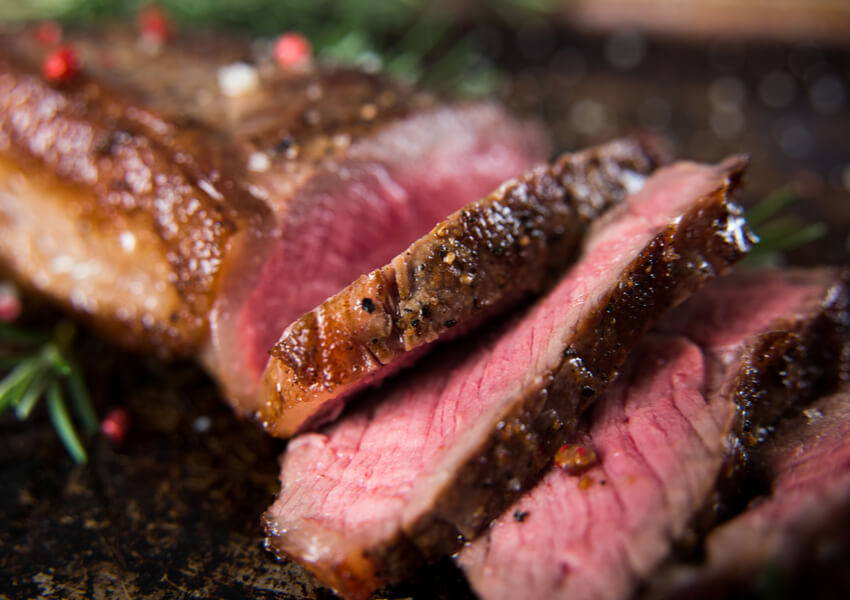 This cut of steak is also commonly referred to as a “NY strip” and top sirloin steak. These steaks are typically sold boneless and are almost rectangular in shape – hence the name “strip”. This meat is well marbled with some large pieces of fat around the edge.

For those who like their beef to taste like beef, the strip offers up bold flavor but is still nice and tender since there’s a great balance of meat and fat.

As for cooking, the strip is versatile and holds up well when grilled, pan–seared and broiled. This cut is also great for shaving to create a Philly Cheesesteak.

Grab a Strip for This Recipe: Easy Beef Stroganoff

You may have heard a ribeye steak called by its other names: the Delmonico, Spencer or Scotch fillet. This cut of steak is sold both bone-in and boneless.  It’s also the most marbled cut of steak with large fat pockets interspersed throughout. All of this marbling gives this steak its amazing flavor and juiciness.

You’ll want to cook this baby over high heat either in a pan, on the grill or in the broiler. Because of the high fat content, you’ll need to be mindful of flareups, unless you’re not attached to your eyebrows.

Pick Up Some Ribeyes for This Recipe: MasterChef-Worthy Steak & Hash 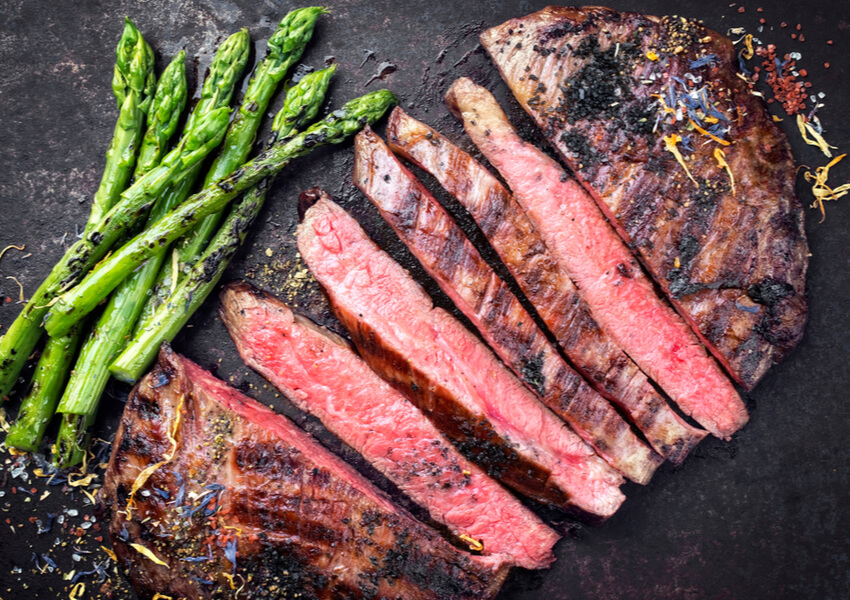 You may have heard of this steak referred to as a London Broil. This steak is from the cow’s flank, just below the loin and sirloin along the abdomen. This cut is lean with not much fat but lots of little fibers running through it.

This is an incredibly beefy piece of steak, but you’ll want to marinate it first to tenderize, then cook on high heat in a pan, on the grill or in the broiler. Be sure to slice the flank steak into thin strips against the grain for maximum tenderness.

Perfect Weather for Grilling? Check Out the Meat Grilling Guide 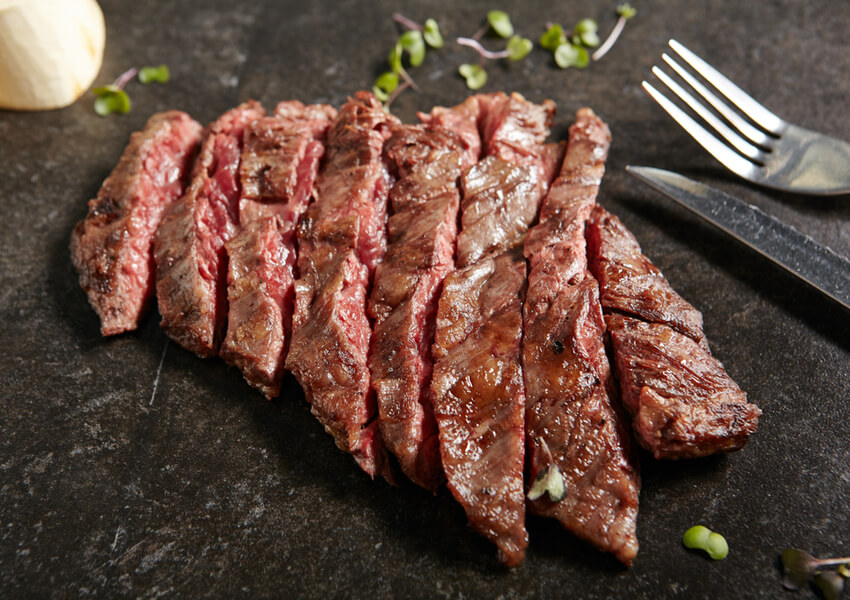 The skirt steak is often confused with the flank steak as both come from the abdomen area of the cow. This steak is sold in long and thin pieces with visible muscle fibers running across the width. This cut has an even bolder, beefier taste than the flank steak and should also be marinated for maximum tenderness. Best grilled or used in a stir fry, this is the classic steak used in Mexican fajitas.

Choosing the best cuts of steak is easy when you know what to look for. Hopefully this guide has helped you feel confident to start cooking more steaks at home. Because let’s face it, life gets better the more steak you eat. And now that you’re an expert in picking out the best cuts of steak, check out our tips for how to cook the perfect steak and different ways to cook it!

How to Cut Up a Whole Chicken Like the Pros