Home › What is the Best Knife for Cutting Meat?

If you enjoy serving large cuts of meat for dinner parties or preparing your meals at the beginning of the week, you’ve got to have the right knives and know which tasks they’re best suited for.

Luckily for the home cooking enthusiast, most common kitchen knives can be used for cutting meat – and each one has a specific purpose. Choosing the right knife and knowing how to use it will help you get the most out of your kitchen toolset.

The Best Knife for Slicing Through the Meats 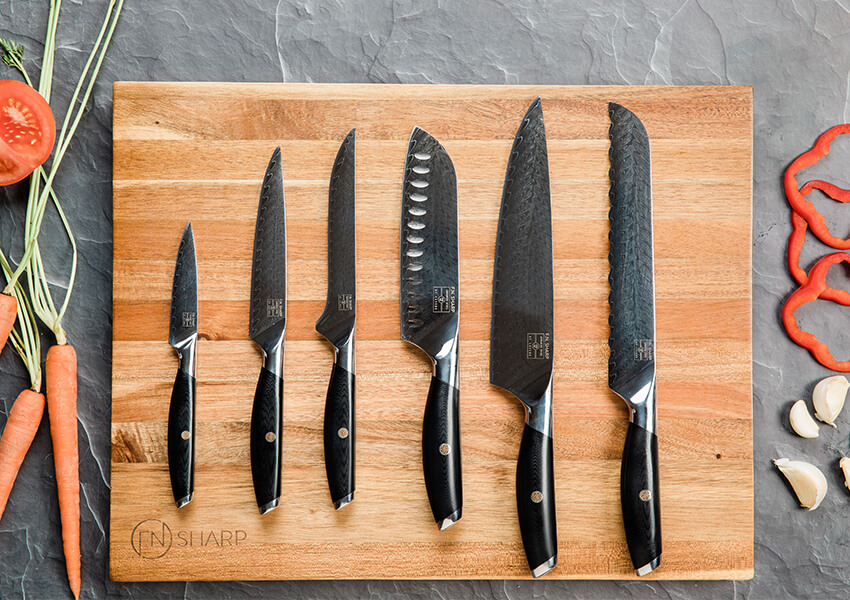 Some of the most common kitchen knives best suited for cutting meat are:

These knives all have their specific purposes in the kitchen. With a better understanding of each type, you’ll be slicing up different kinds of meat in no time. 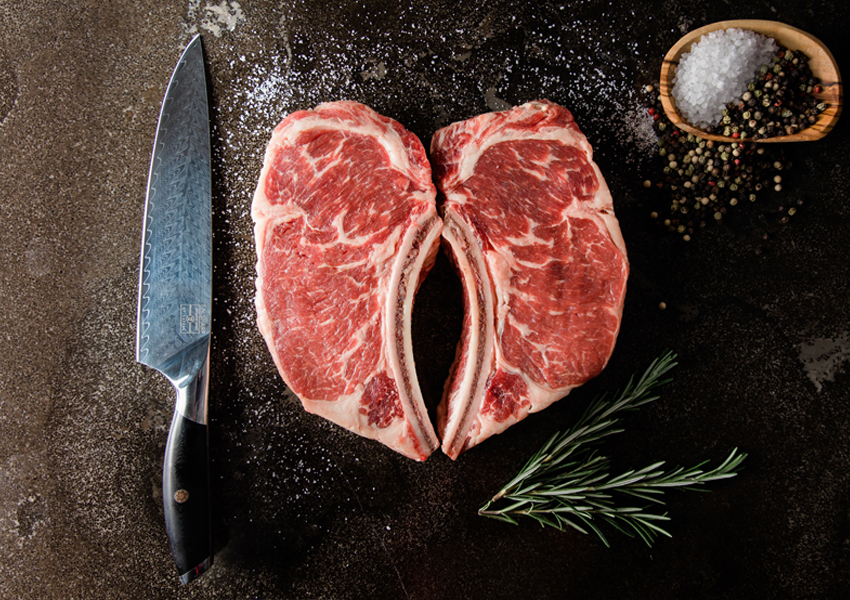 The chef’s knife is considered one of the most important knives in your kitchen. Designed to perform many different kitchen tasks, the chef’s knife comes with many uses in the kitchen, but here we will focus on how it is best used for cutting meat.

The heel of a chef’s knife is used to cut through thick slabs of meat, including bones. The tip of the blade is used for trimming fat and removing sinew, and the edge is used for slicing meats and disjointing bones.

When using a chef’s knife to prepare meat such as beef or pork, it’s important to start by slicing with the heel of the blade. Pulling the knife carefully toward your body, apply gentle downward pressure, letting the weight of the knife do most of the work. Make sure to use the entire length of the blade. The good thing about this technique is it can work with most types of boneless meats, such as poultry and lamb.

The chef’s knife is also the go-to for cutting up a whole chicken into different poultry cuts, as well as carving that Thanksgiving turkey! 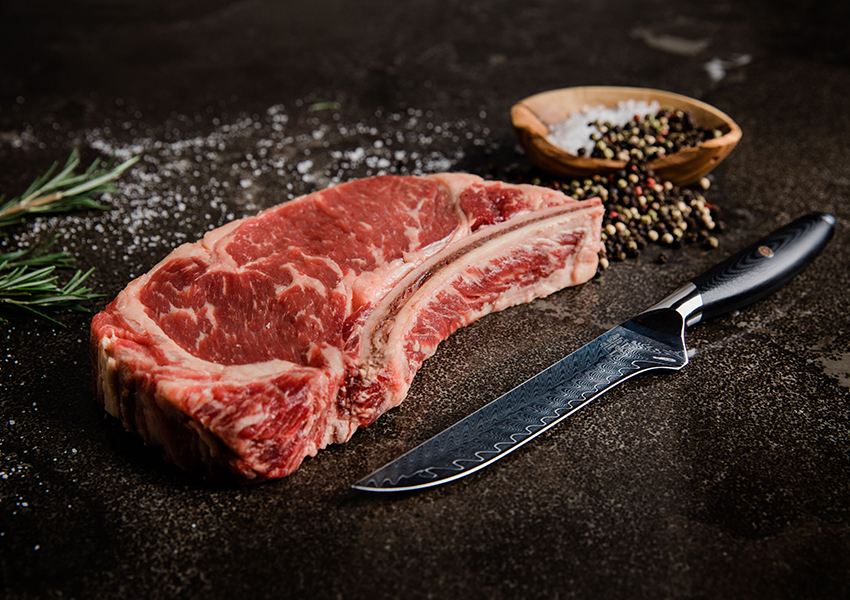 Boning knives have sharp, thin, flexible blades that are used to remove the bones and skin from various meats like pork, beef, and lamb, as well as poultry and fish, making them ideal for preparing meat for cooking.

Cuts of meat, such as a rack of lamb and various beef or pork cuts, have a layer of fat that should be removed before cooking. The boning knife is perfect for peeling away the excess skin and fat, and it can help break away cartilage in joints, like separating the drumstick or thigh from the backbone of a chicken. It can also be used for butterflying meat, like a flank steak to make stuffed flank steak.

More on Steak: The Best Cuts and How to Cook the Perfect Steak

When preparing meat with a boning knife, you’ll want to use a standard grip, keeping the blade against the meat while using long strokes. You’ll also want to avoid using a “sawing” motion and instead utilize the length of the blade to make long, smooth strokes, as you pull the meat away from the bone.

Knife Knowledge 101: How to Use a Boning Knife 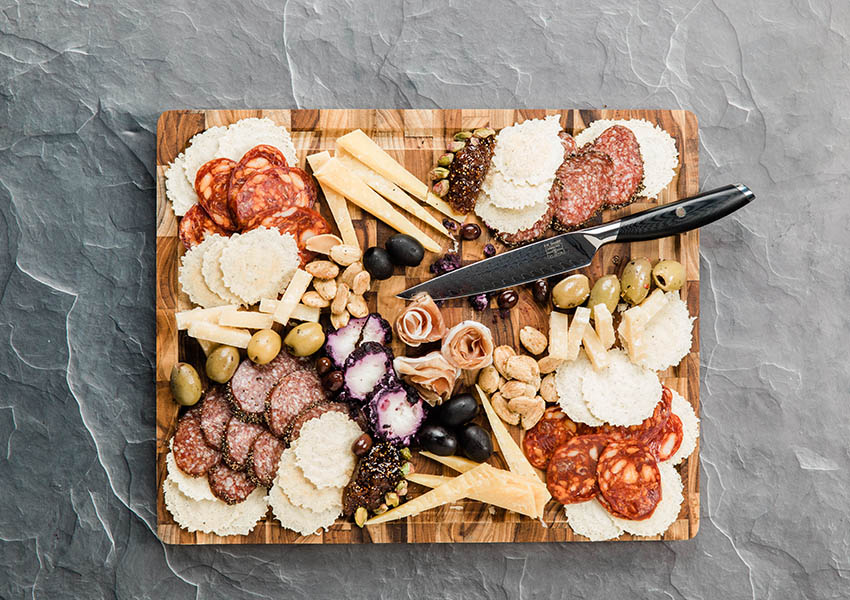 These knives range from 4-7 inches making them longer than a paring knife but shorter than a chef’s knife. Utility knives are considered a solid all-rounder in the kitchen.

Some utility knives have a serrated edge, which calls for an unfavorable sawing motion when cutting meat. Straight edged utility knives, like what you’d get from premium manufacturers like F.N. Sharp, make clean cuts without compromising the visual aesthetic of food.

Utility knives can also be used for trimming fat and removing the skin as well as slicing smaller pieces of meat. These knives are also great for slicing cured meats such as hard salami, pepperoni, and sausages. You can even use them for small fish fillets or cutting chicken breasts. 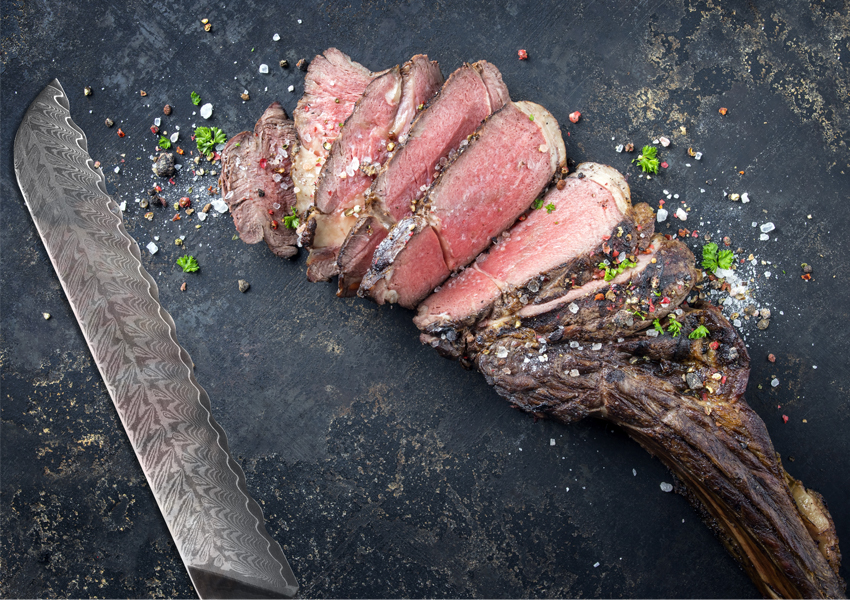 The bread knife is yet another versatile tool for home cooking enthusiasts to keep in their kitchen. With their serrated edges, bread knives are able to perform a wide variety of tasks.

As the name implies, bread knives are used to slice crusty loaves of bread without crushing the delicate interior. Other uses  for this handy knife include slicing tomatoes, melons and certain kinds of cake – but a bread knife, in theory, can be used for slicing meat as well. Although most professional chefs would never recommend doing so, a bread knife can be used as a stand-in for a straight-edged slicing knife when carving cooked meat that has a hard outer crust, like a prime rib or a brisket.

More on Prime Rib: >The Best Prime Rib Recipe and How to Carve It

In most cases, a bread knife’s serrated edges can tear and mangle meat when you use it for slicing, especially pointed serrations. A wider, scalloped serrated knife, like the F.N. Sharp Bread Knife, is recommended for the home cooking enthusiast as it not only reduces the crumbs and tearing of slicing bread, but it also allows for cleaner slices of meat that retain more juices overall.

Knife Knowledge 101: How to Use a Bread Knife 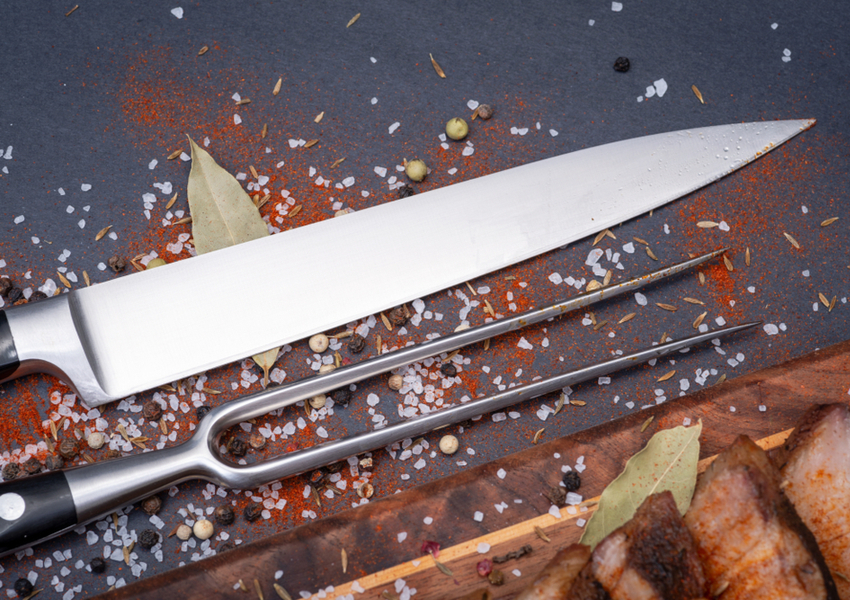 Carving knives have slender blades with sharp, pointy tips. The design is meant to reduce resistance as you move the blade back and forth. These knives are mainly used for carving a ham, or a leg of lamb, or poultry like the Thanksgiving turkey you’ve been looking forward to eating all year.

It is important to make sure the blade of your carving knife is long enough. Otherwise, you’ll end up with unevenly sliced meat. When using a carving knife, it’s best to stabilize your meat in place and slice from top to bottom carefully, as to avoid injury.

Since a carving knife’s main task is to carve meat, it isn’t an essential knife for every home kitchen. You can get the same results with a sharp chef’s knife or utility knife depending on the size of the meat – and both are included in most kitchen knife sets.

Cleavers, commonly called “meat cleavers”, are among the largest knives a chef will have in their toolkit. These knives come with a wide, stout blade and are used for a number of tasks. As their size and shape suggest, cutting meat is one of their primary uses.

Given the portion sizes they are best used for, most home enthusiasts won’t find this knife to be a necessity in the kitchen. There are also certain meats, like a whole roast duck, that require you to use the cleaver in a way that performs more like a chef’s knife.

However, in professional settings where whole animals are being prepared, a cleaver is useful for tasks such as hacking through bone. When using a cleaver to prepare poultry or meat before deboning with a boning knife, the weight of the blade does the majority of the work. The key is to hit the food with the top third of the blade to allow for more leverage if it doesn’t go all the way through.

Three Tips for the Perfect Cuts 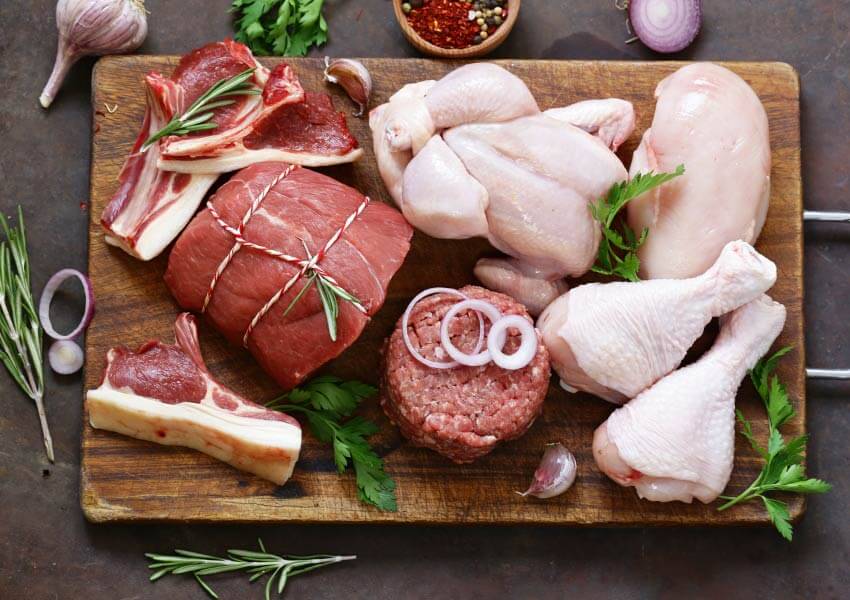 Last but not least, a few things to keep in mind when preparing your own meats at home:

Choose the Right Knife Set for Your Meals

Most knife manufacturers package their knives into various sets. You can find individual knives available at almost any retailer, but a full set is worth the investment. F.N. Sharp offers the durability and cutting power of Damascus steel in a kitchen-ready package – plus an easy way to keep them perfectly sharp. Find out more about our premium kitchen knife sets and effortless sharpening service today!