It should surprise no one to learn that Greece has a very long history with both cheese and wine. Long as in millennia long, for example, the production of Greek cheese dates back to the Neolithic period and early Bronze age. The oldest archeological evidence of wine production in Greece is over 6,500 years old, and the Greeks were the ones who originally taught winemaking to the Italians. The Greeks have been making cheese and wine for a very, very long time and have been, one can only assume, consuming them together. Both Greek cheese and Greek wine have evolved over time and are still considered delicacies today. Let’s take a look at some of the best pairing options for both of these historic treasures! 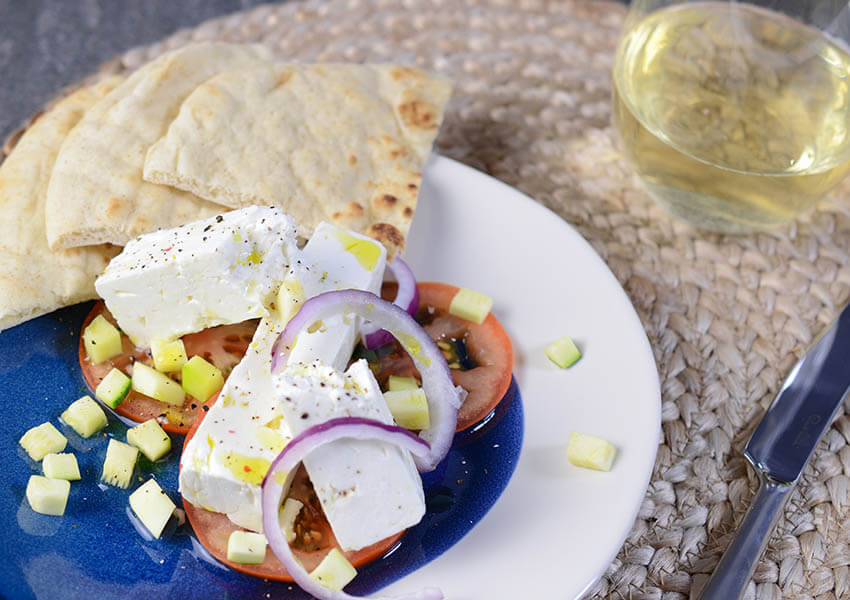 First up is feta cheese, a top ingredient used in Greek cooking and probably the most internationally well-known cheese from Greece. Feta is made with a mix of goat and sheep’s milk, though one can find versions made entirely from goat’s milk, or even from cow’s milk. Feta is a very soft, creamy cheese which must be kept in a brine of lightly salted milk or in oil to prevent it drying out. As it dries, the texture becomes more crumbly and grainy, and the salty taste becomes more concentrated. A creamy feta can be spread on crusty bread and sprinkled with herbs, and a dryer version can be crumbled into salads and melted onto flatbreads. Feta cheese needs a bright, fragrant white wine to stand up to its salty, intense flavor – try it with an unoaked Moschofilero or with a New Zealand Sauvignon Blanc. The herbal, grassy notes of these wines will complement feta’s intensity, and their acid will balance the creaminess of the cheese.

Working with feta can be tricky since it crumbles easily, so use a serrated cheese knife to slice off the desired portion. If you don’t own a cheese knife, use a wet or oiled paring knife. The moisture ensures you get a clean slice through the cheese without leaving too much on the blade. Then spread or crumble as desired for your dish. 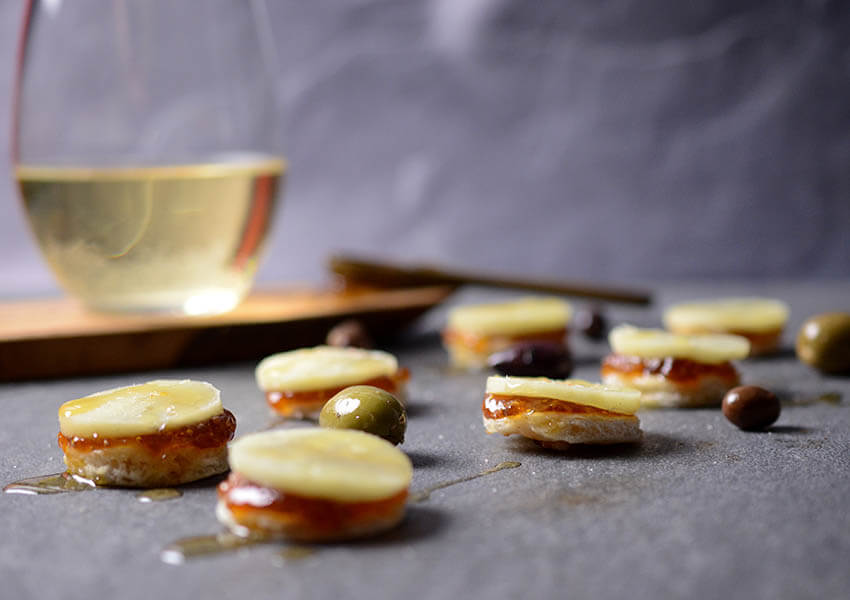 Next up, Graviera. Also known as the Gruyere of Greece, this yellow cheese ranges from soft and buttery to hard and tangy, depending on its age. It is generally made from either goat or sheep milk, though cow’s milk is occasionally used. Graviera has a slightly sweet taste and can become nutty with age. Varieties made with cow’s milk may have more of a caramel flavor. The mellow flavor of graviera means it can be very versatile – younger cheeses can be sliced and eaten or baked in dishes, and older, tangier cheeses are often grated into pasta or used in salads. This cheese can also be used to make saganaki, the famous Greek “flaming cheese” dish, to which we will return later. Try pairing a smooth young graviera with a full white wine that will enhance the round softness of the cheese and not overpower the sweetness. Greek wines made from Malagousia or Vidiano, and full-bodied whites with good fruit and floral aromas can be a great match for this cheese – or try a Chardonnay with neutral oak.

Depending on the shape of your cheese, your best bet is to use either a cheese knife or a cheese lyre (wire cheese cutter) when slicing graviera cheese. You want a clean smooth cut if you are serving it as slices or using it to make saganaki, so if using a knife to cut through this cheese, then opt for a utility knife and make sure it’s extra sharp as exerting too much pressure in one spot can flatten the cheese instead of slicing. 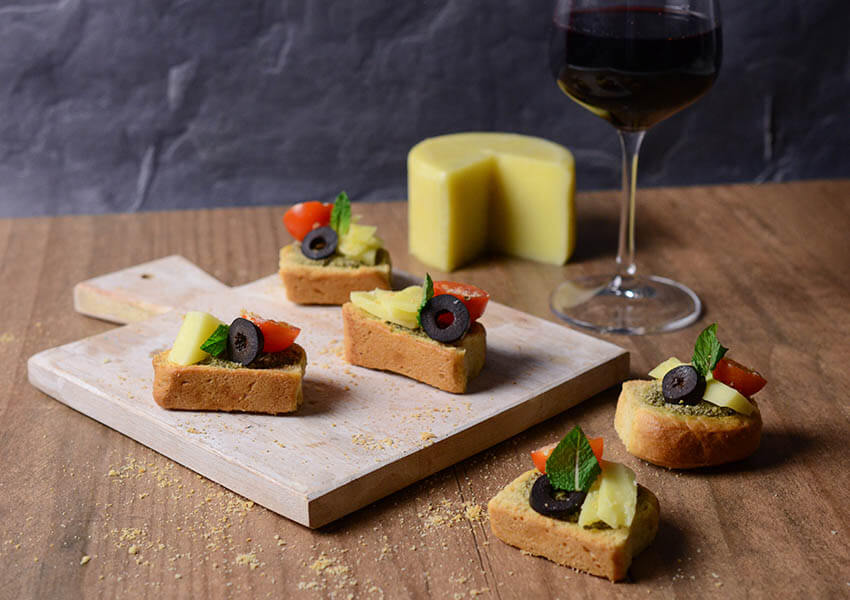 Kasseri cheese is often used to make saganaki, as it holds its shape well and melts neatly. Made from goat or sheep’s milk, kasseri is a very common table cheese in both Greece and Turkey, often used in sandwiches or paninis. The cheese is springy and semi-soft, with a mildly salty taste similar to provolone, but with more intense flavor. The aftertaste is less intense than the aroma, mildly sweet even, which means kasseri cheese is also used in delicately flavored dishes such as omelets and pastries. As kasseri ages, the flavors become more concentrated, rich and peppery, making it a great match for fruit-forward spicy red wines such as Agiorgitiko from Nemea. This red wine offers black cherry, sweet raspberry, black currant, and nutmeg notes, making for a very harmonious pairing with a mature, spicy cheese. Other options could be a fruity Pinot Noir or a ripe Grenache from Southern France.

The texture of kasseri cheese makes it very easy to cut, so almost any knife should work. If using a non-serrated knife, make sure to slide the point of the knife into the cheese before firmly pressing down through the cut. This is especially important if you plan to fry the cheese and need an even slice.

Finally, we come to the much-mentioned saganaki! The Greek word saganaki actually refers to the two-handled skillet in which this dish is served, but abroad it has come to refer to the flaming cheese itself, whose presentation is as crucial as its preparation. Saganaki as we know it consists of slices of fried cheese, served tableside in flames. Originally a simple plate of fried cheese served in Greek tavernas, it became famous after the Parthenon restaurant in Chicago began serving their saganaki actually on fire.

To make this dish, start with several slices of a firm Greek cheese such as kasseri, graviera, or kefalotyri. Make sure you use a clean, sharp knife to slice the cheese so that slices are uniform. Wet the slices of cheese briefly in water and dredge them in flour. Heat several tablespoons of olive oil in a skillet and quickly sauté the cheese slices on each side until golden brown. The cheese should hold its shape during cooking, so choice of cheese is crucial. Once the cheese is cooked on both sides, remove from skillet to a plate or saganaki and pour half an ounce of brandy or ouzo over the slices. Light the alcohol and enjoy the show! Once the flames die down, add a squeeze of lemon juice and serve.

Note that it is safest to pour alcohol from a shot glass when lighting the cheese to avoid flames jumping to a bottle in your hand. Setting yourself on fire is guaranteed to lessen your enjoyment of this delicious dish.

Whether you prefer your cheese served in flames with fanfare or while quietly watching the sunset, Greece has something for you. And despite their long history and unique styles, Greek wines offer excellent value for price and are often the best choices to pair with Greek cheese, so pick some up today. Sip, share, set on fire – whatever makes you happy. People have been enjoying Greek wine and cheese pairings for millennia and they certainly aren’t going to be stopping any time soon, so join the party! Opa!

15 One Pot Meals to Make Eating Healthy Easier in 2020

How to Throw a Last-Minute Holiday Dinner Party