It’s the holidays, which means everyone is bringing out their prime meats, from ham and turkey to prime rib and brisket. Whilte you’re more likely to encounter a meal featuring brisket throughout the year than a ham or turkey dinner, it doesn’t mean that preparing, cooking, or carving it is any easier. If you celebrate Passover, it’s likely you’ve been eating brisket your entire life. This large, tough cut of meat is usually slowly braised with onions, carrots, brown sugar and a touch of vinegar for Seder.

However, on the completely different side of the brisket spectrum, you’ll often find it commonly used in Texas-style barbecue, slow roasted on a spit or grill and seasoned with rubs, spices, and sauces. No matter how you enjoy it, here are some tips for perfectly carving that brisket. 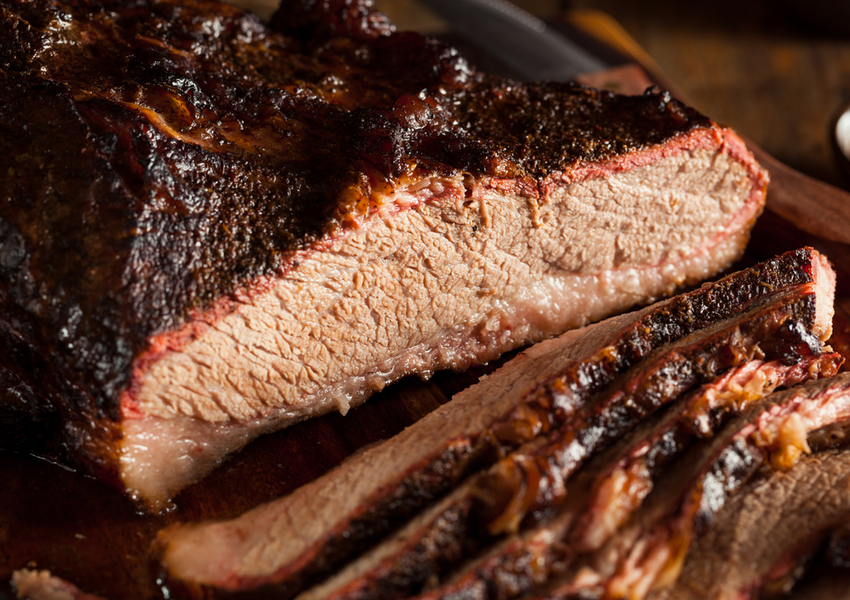 First, what exactly is brisket? This is the cut of meat that is located in the front of the cow – it’s basically the ‘pecs.’ The pectoral muscle (brisket) usually weighs about 12 to 20 pounds. There are actually two parts of the brisket: the flat and the point.

The flat, which is most commonly sold, is the tougher of the two pieces because of its dense connective tissue. Low and slow is the best way to cook this cut in order to break down that tissue for a tender finished protein.

The ‘deckle point’ is the second portion of the brisket and is marbled with fat, making it the perfect choice for shredded barbecue meat because it’s so incredibly juicy.

Knowing what cut of the brisket to ask for when planning your menu makes all the difference for a successful outcome. But, there’s no doubt brisket is the go-to protein when cooking for a crowd, and knowing how to slice it properly will save you much-needed time and energy to focus on other things. Now let’s get started!

More on Meat: The F.N. Sharp Guide to Beef Cuts 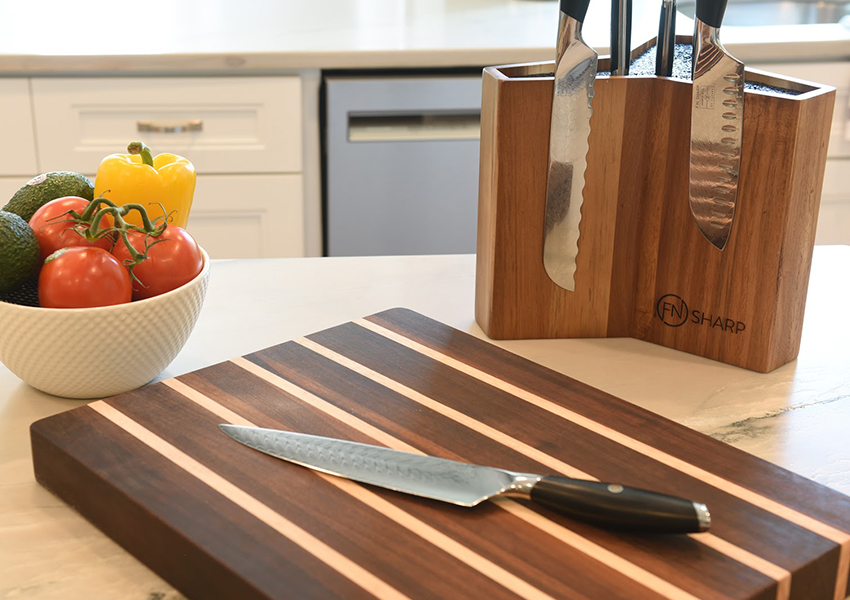 Choose a cutting board that’s big enough to set a cooked brisket on. For plastic or acrylic cutting boards, place a damp towel underneath to prevent it from sliding around while you cut. You’ll be exerting some pressure here, so having a stable workspace is critical. 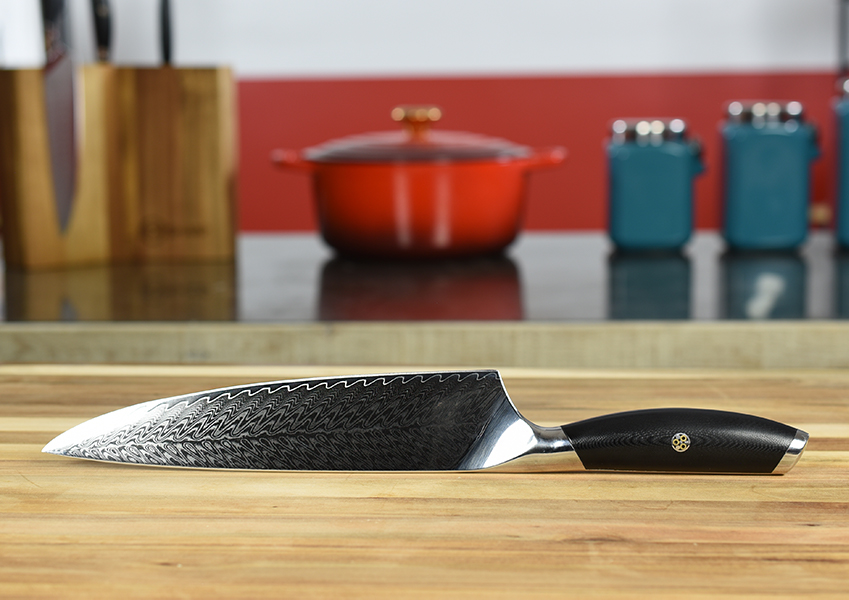 It’s common sense to make sure your knives are freshly cleaned and sharpened,  especially if you’re slicing the tougher cuts of meat. Sharpening your kitchen knives at home takes time, knowledge, and lots of practice, so be sure to consider your options. If you’re an F.N. Sharp customer, then your knives are always ready to go thanks to our unique sharpening service.

A Chef’s Fork: Roughly between 11 and 13 inches long, a chef’s fork is used for securing meat while it’s being sliced. A chef’s fork has two long tines and a handle with a base for resting your forefinger and thumb on. Whether you’re left- or right-handed, a chef’s fork is absolutely necessary for holding the meat down while you slice with your other hand.

The Chef’s Knife: The all-star of the kitchen year-round, the chef’s knife is used for slicing, mincing, and chopping. If you are a seasoned home cook, you probably use your chef knife a lot already. This kind of familiarity is helpful when you’re slicing into any large cut of meat.

More on the Chef’s Knife: 5 Reasons Every Cook Should Have One

The Santoku Knife: The Santoku knife is the Japanese version of a chef’s knife and is also used as a multipurpose tool. The distinguishing feature of the Santoku blade however, is its Granton or scalloped edge, which features indentations that allow tiny air pockets to get between the food and the blade to prevent sticking between slicing – perfect for meats that may be heavily seasoned or sauced.

A Boning Knife: The boning knife really comes in handy for trimming excess fat from on one side of the brisket and smaller pieces of fat on the underside. That fat can act as a barrier between the meat and the flavor, so it’s best to trim it off. With a thin, semi-flexible blade, the boning knife is the perfect tool for getting in between the connective tissue and separating the fat away from the meat.

How to Slice a Brisket 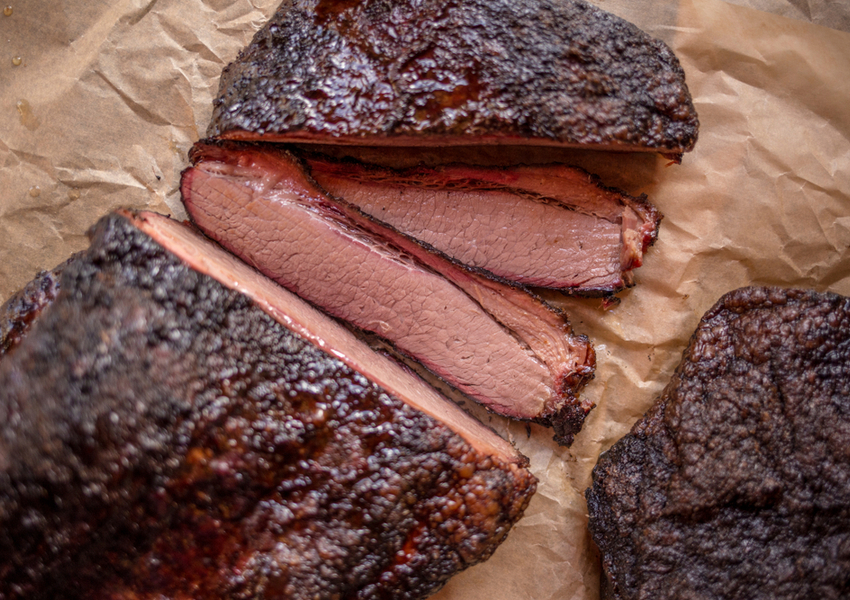 Except for barbecuing, when you want the real savory flavor of the fat, use your boning knife (a paring knife may work, too) to trim the fat from a brisket before braising it to prevent the sauce from getting too greasy. Also be sure to rest the brisket for a minimum of 20 minutes before carving it to make sure those delectable juices stay in the meat!

For extra thin slices, wrap the cooked brisket in aluminum foil and chill overnight. The meat will harden, making it easier to slice into smaller pieces. And always cut perpendicular to the grain of the meat. The grain is how the strands of muscle run through the meat and looks like a series of rubber bands.

Now, to start carving, place the brisket flat side down and slice evenly with the chef or the Santoku knife, using short strokes to go against the grain. Seesaw your knife through the meat and work from one end to the other across at an angle to create each slice.

To shred brisket, first cut it into thicker slices, about a half inch wide, then shred with a fork in each hand. If pressed for time, you can also try shredding it in a mixer.

That’s it! If you follow these simple prep and carving tips, you can always be sure your brisket will turn out tender and juicy! Not only is brisket affordable and readily available, there are also hundreds of ways to prepare it! And when it comes to feeding a crowd, brisket is the way to go!

Going for the prime rib instead? Here’s a great prime rib recipe and here’s how to carve it!
Share
Tweet
Pin