Home › italian › Make a Charcuterie Board with These Italian Cured Meats

A charcuterie board is like a miniature Thanksgiving feast with its own little table and utensils. The word originates from the French, but it’s evolved to include a variety of fruits and nuts – basically a cornucopia of small, delicious items. However, we’re going to focus on an Italian meat board, because how is that not a good idea? Also, as an added bonus, Italian meats all have names that sound like they’re characters from “The Godfather”.

The key thing to remember about our charcuterie board is that it’s cured meats, so no grilled ribeyes or T-bones, but definitely Coppa or Guanciale. The process of curing involves ageing, salting, brining, smoking or drying of meats to make them not only tasty but lasting. In fact, bacon is a form of cured pork.

A word about knives: When preparing Italian cured meats, you can’t go wrong with a charcuterie knife, as it’s sturdy and its sharp blade is made for clean cuts. The wider end of its blade is good for spreading, and the curved edge is perfect for slicing and chopping.

Of course, a sharp chef’s knife will work wonders, and for large chunks of meat that need to be separated, you can’t go wrong with a cleaver, although that’s for large jobs and generally not used for the more delicate nature of presenting the final product.

A knife with a long, sharp and skinny blade – such as a boning knife – will also help with the thin slicing necessary for some meats. If you want to add cheese, there are specific knives for that aspect, too, but you can usually get by using a utility knife.

Now let’s get to the meats!

Best Knife to Use: A long slicing knife

Bresaola is an air-dried beef that originates from Aosta, near the Alps. It has a deep red color, like blood almost, and a delicate flavor – and it’s best when sliced very thin, coated with olive oil and just slightly drizzled with capers and lemon juice.

To up the ante a little, it can be served with raw artichokes, or with Robiola cheese.

This meat is made from ground pork, usually in sausage form. The word translates from Italian to “hunter,” and has origins of people on the hunt eating the meat for sustenance. It’s usually about 7 inches long and cured with herbs, wine and spices. It’s a tough meat, and it’s good with provolone cheese and bread. Because it cuts into small pieces, it’s an ideal addition to the board.

Capicola is an Italian meat made from the neck or shoulder of a pig. It’s tender and smoked with herbs, spices and a little bit of wine sometimes. Because the meat is so flavorful, many serve it in bread without cheese to really enjoy the flavor. 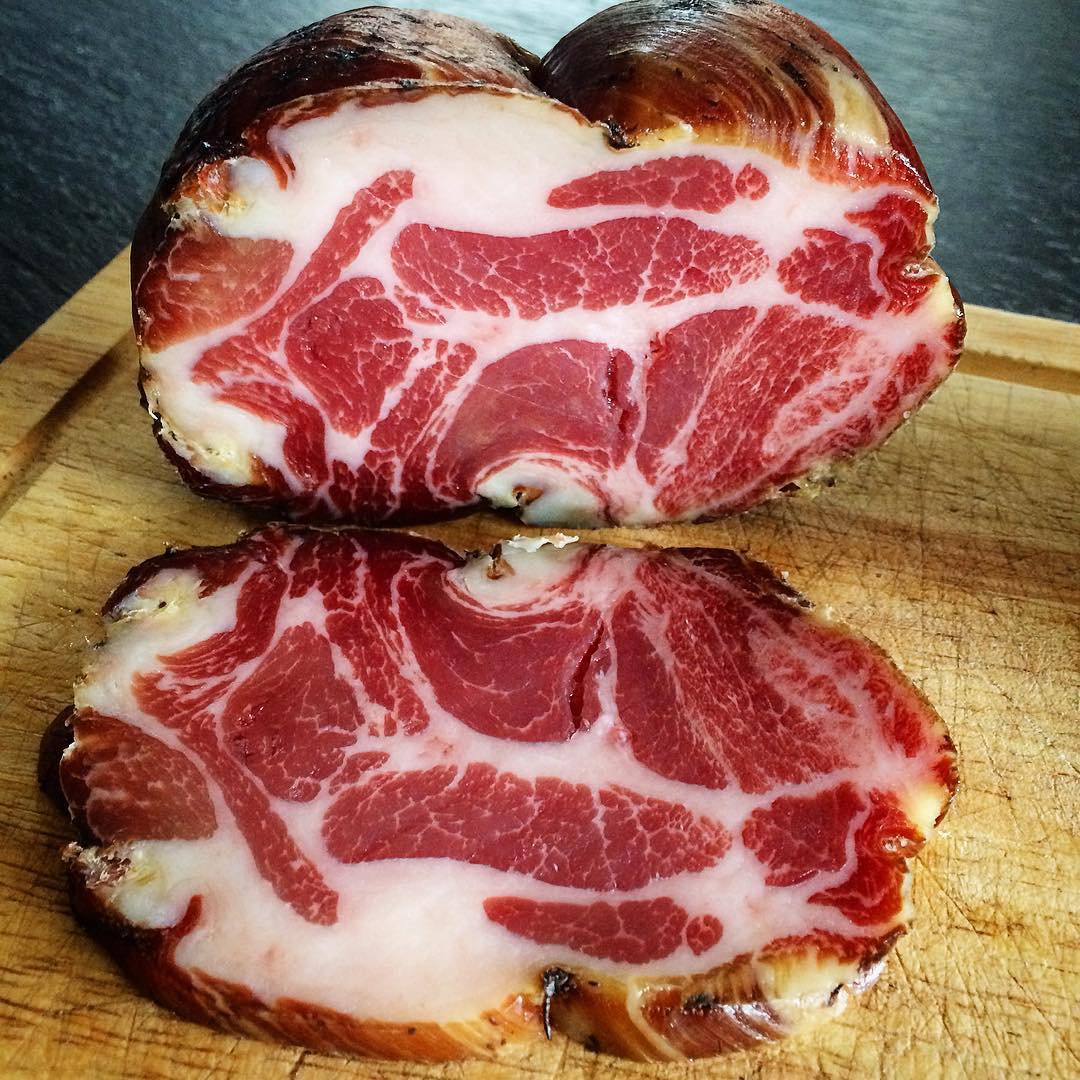 Coppa is similar to Capicola except it comes from the head or the neck of the pig. It translates from Capo, which means head in Italian. It’s sometimes referred to as the poor man’s prosciutto (we’ll get to that in a bit), and it’s also marbled in appearance. It’s dry-cured and often massaged during preparation with spices like cinnamon, nutmeg or cloves, and of course, salt and pepper. 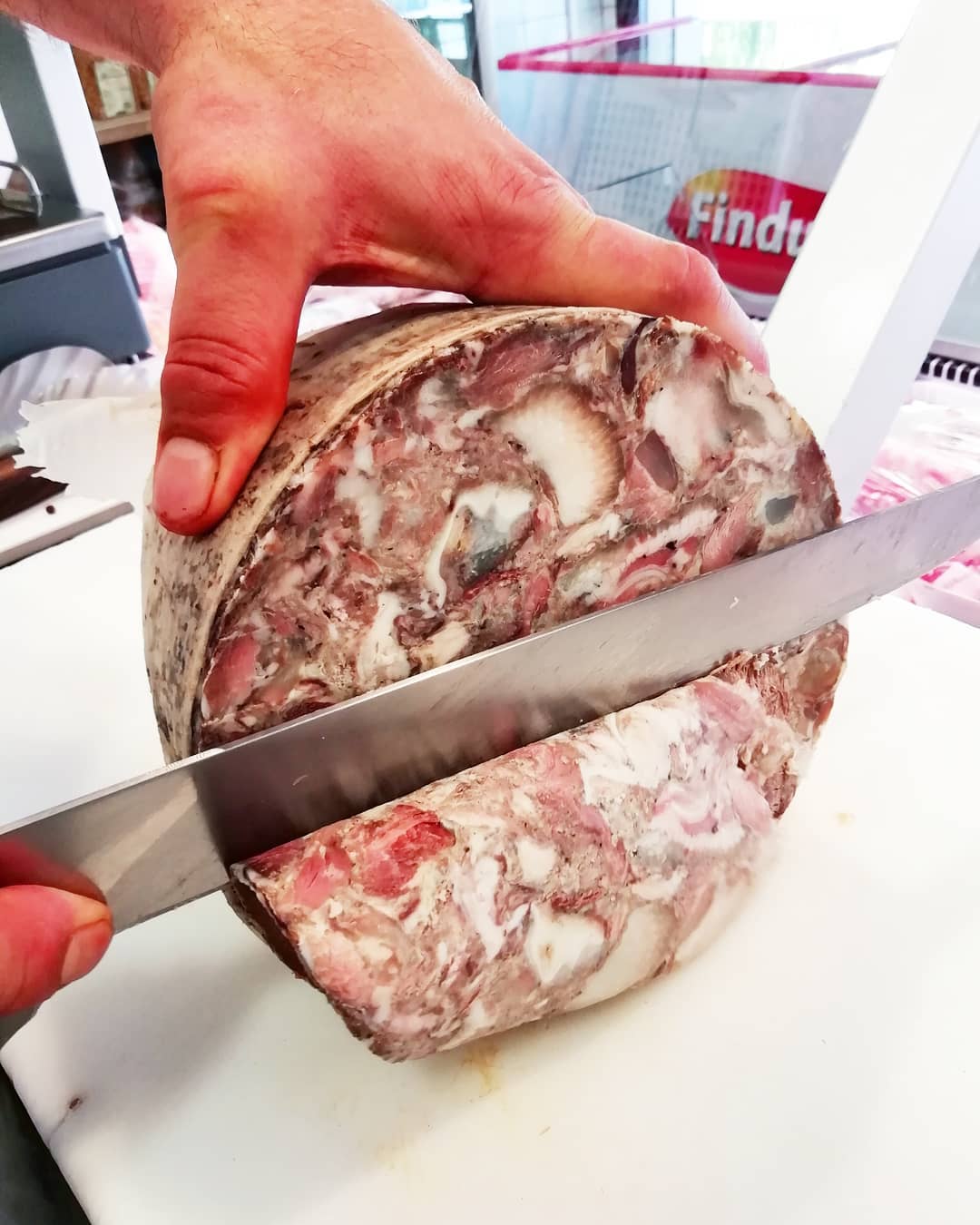 Best Knife to Use: A long slicing knife or a chef’s knife

Coppa di Testa is Italian hog head cheese, and its off-putting appearance belies what is one of the juiciest and most flavorful Italian charcuterie meats. It’s usually made from brining a pig’s head with ingredients like brown sugar, garlic and bay leaf, among other things. After that, it can be poached with oranges and peppercorns. Finally, the meat is removed and gelatin is added, giving it a distinct texture. 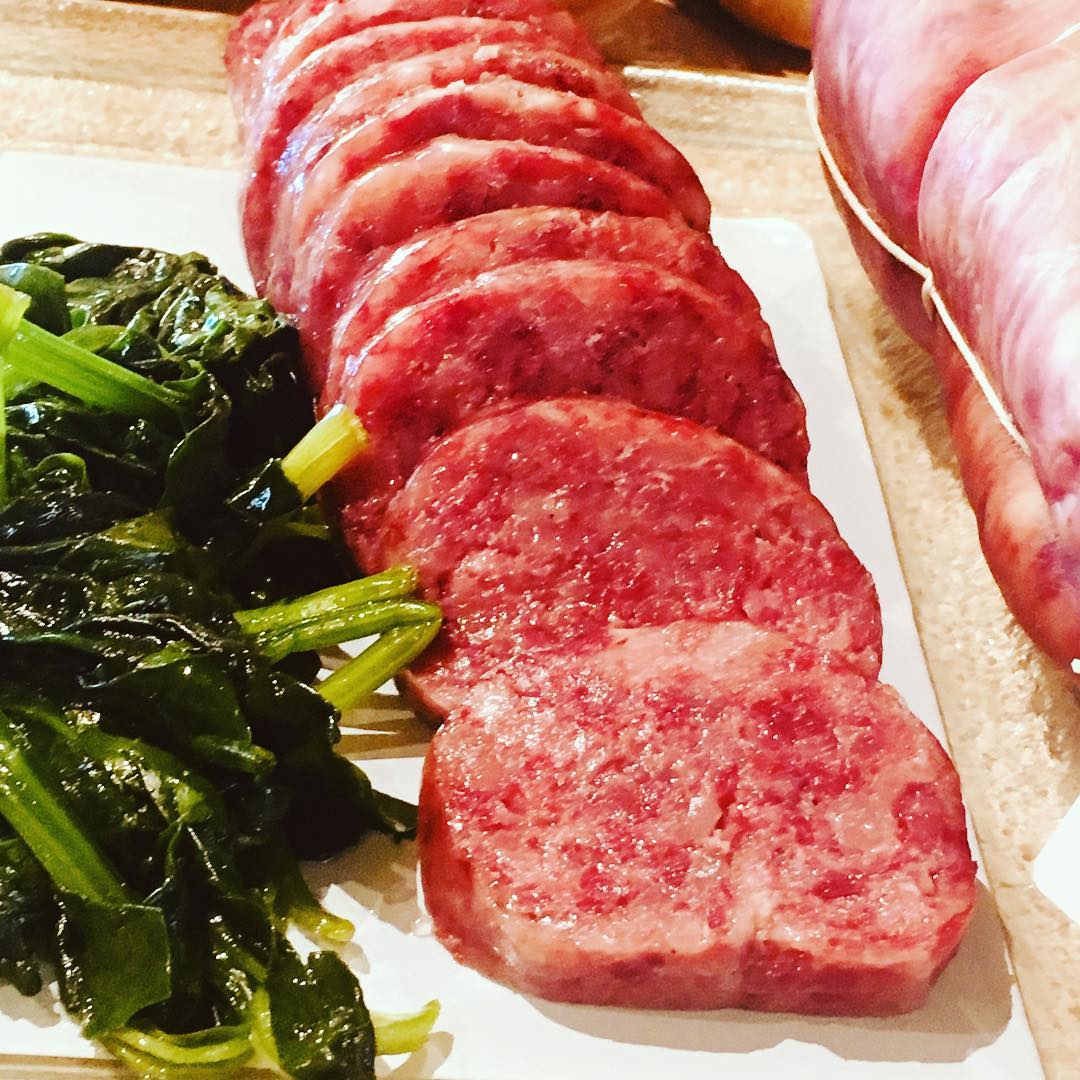 This meat has its origin in the North of Italy. It was usually served with lentils on New Year’s – meant to bring good luck, but it has grown in popularity into a national and year-round staple. It’s a large pork sausage that requires slow cooking and several hours of low-heat simmering. The name comes from cotica, or rind. It has a creamy, mild flavor and the fatback gives it a sticky texture.

Culatello is a special prosciutto make from larger pigs. It’s red and shimmery like sparkling bacon, and it’s valuable (expensive) and quite flavorful. Think of it the way one thinks about a filet. The meat was banned for years in the U.S., but that ban was recently lifted. It’s prepared by seasoning a prime cut of ham, and then inserting that into an oblong-shaped pig’s bladder. Some versions are then cured for up to a year in special buildings (In Italy) near rivers where mist imitates mold, imparting rare flavors. 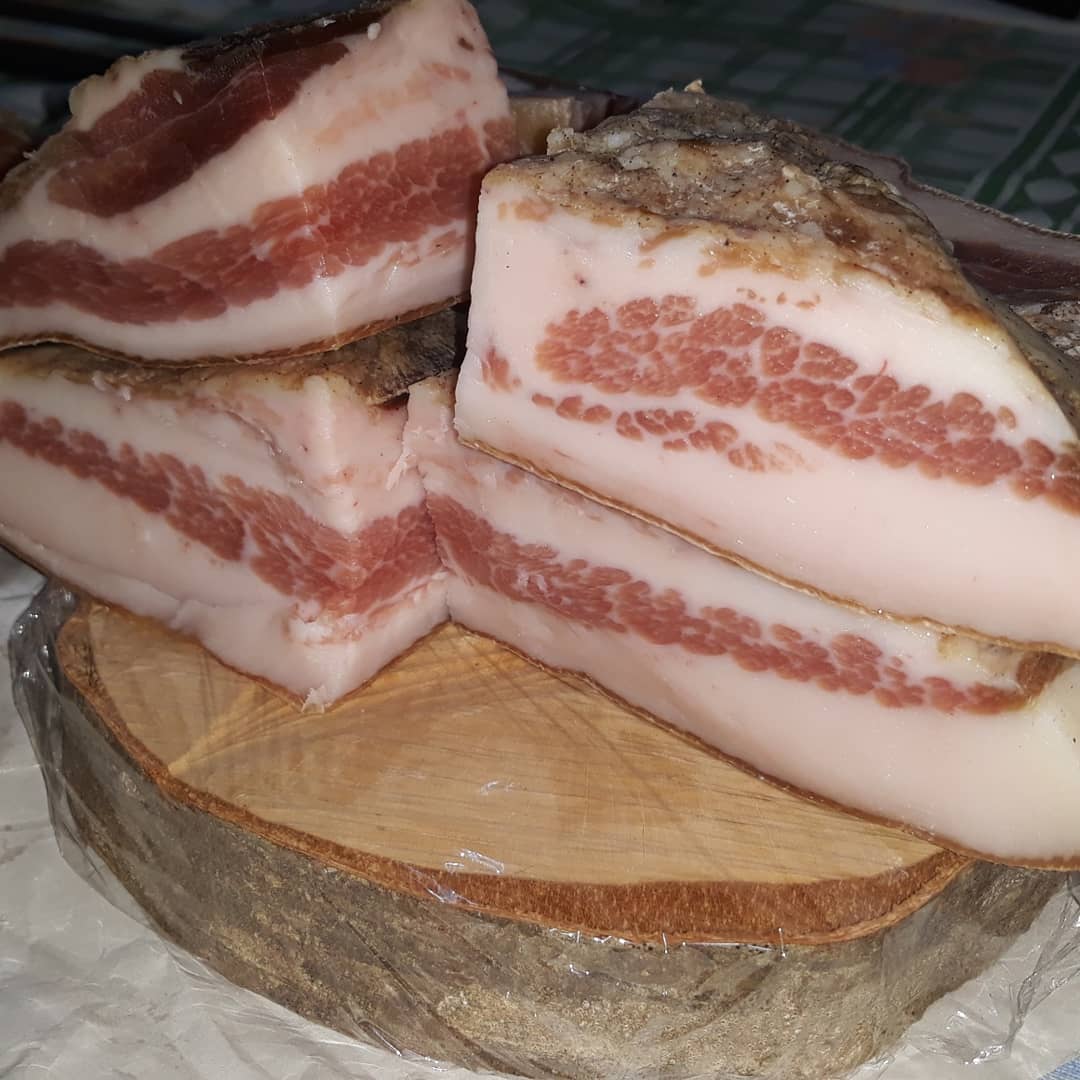 This meat, the Italian word for cheek, is made from pork jowls. It’s a traditional ingredient for the popular Italian dish pasta carbonara. The key ingredients to preparing it are humidity, salt, spices and time. It has a distinct look and is usually cut into chunks, but it can be served in strips as well. It’s also known as “pig candy”.

Lonza is air-dried cured pork loin, and it’s usually seasoned with fennel or pepper, It’s very lean and must be sliced paper-thin – it almost looks like a thin slice of a flower. Be generous with the olive oil, because that is the best way to illustrate its flavor. This thin marbled meat is one of the first cured meats from a pig slaughter and it signifies a coming Spring in Italy.

Best Knife to Use: A long slicing knife or a chef’s knife (depending on how you want it served)

Lardo is what its name implies: back fat from a pig. It’s cured with rosemary, and the best versions of it come from Carrara in Northern Italy, where it’s usually paired with a glass of white wine. It comes in slabs that look like vanilla ice cream covered by bread crumbs. It’s a little sweet and earthy, and It can be served thin or thick.

Mortadella is basically what store-bought bologna is supposed to be. It’s a ground pork mix delicately roasted with black pepper, nutmeg and a smattering of chopped pistachios, which gives it a light, refreshing texture. It’s served thin and can be eaten alone or in a sandwich. 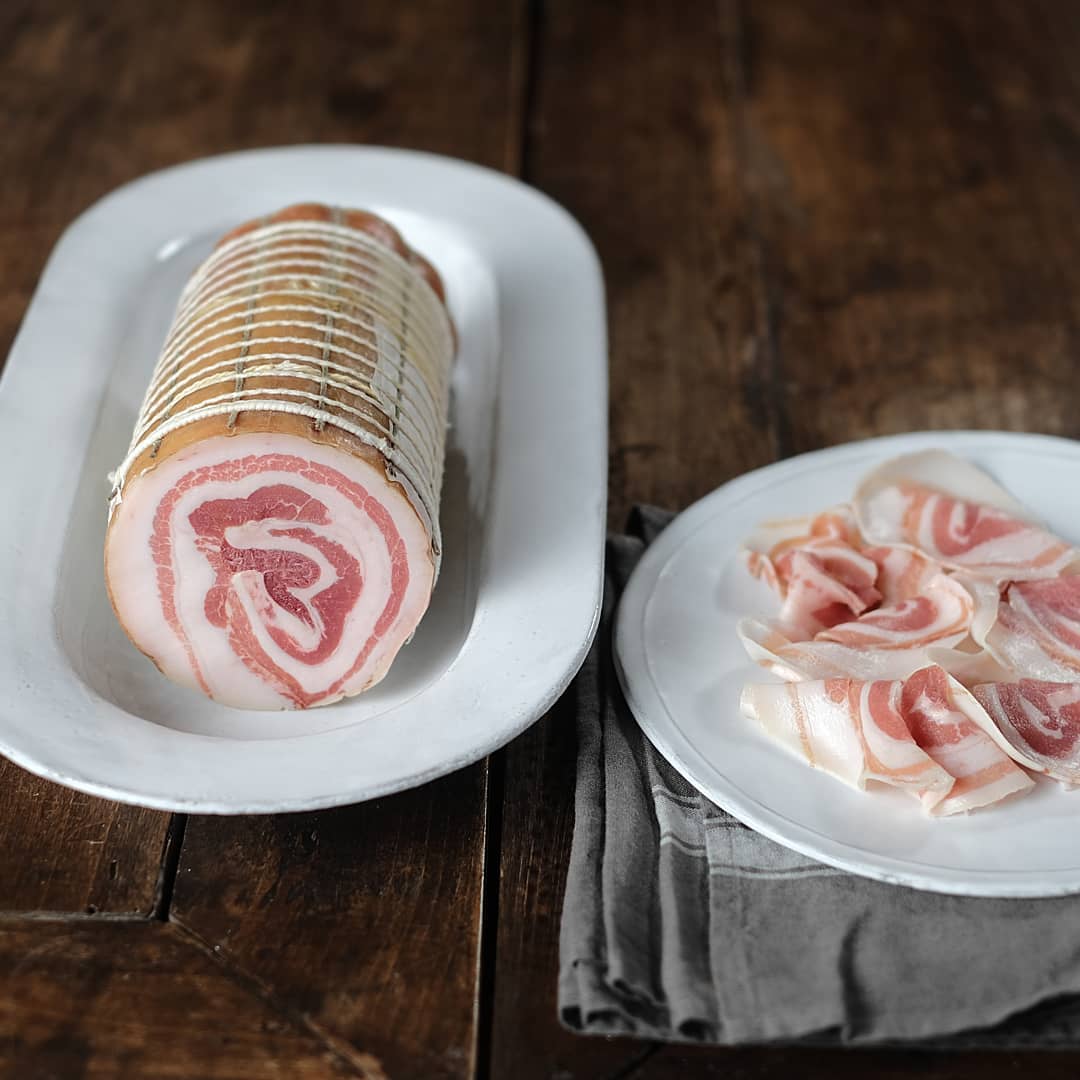 Pancetta is Italy’s version of bacon, made with pork belly meat and salt-cured. It can be sliced off a roll or prepared into cubes as an additive in pastas. It’s circular and has a delicate pink and white coloring. 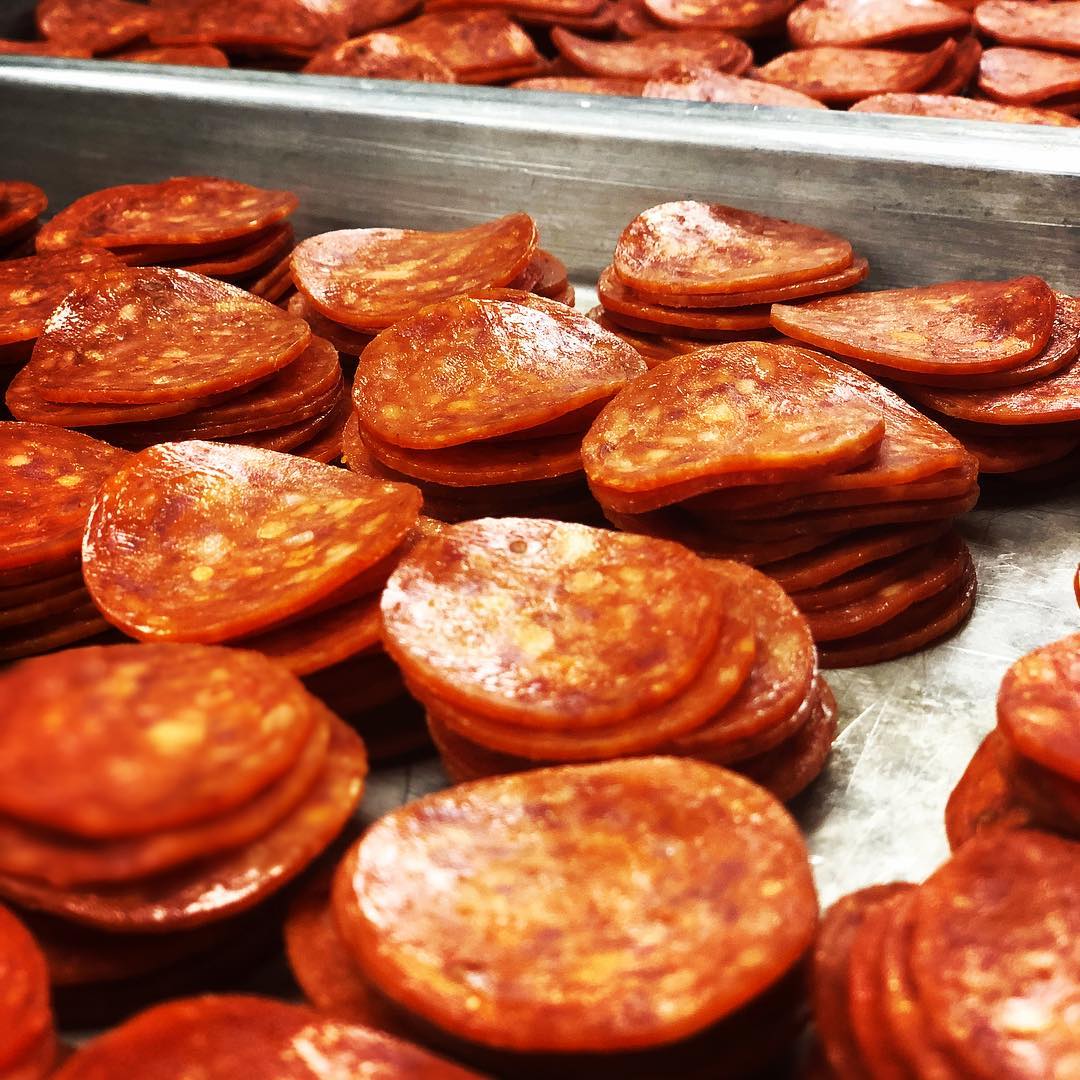 Pepperoni is the Michael Jordan of charcuterie. It’s famous, easily recognizable and usually delivers what’s expected. It’s made from a cured pork and beef mixture, and pepper or paprika (hence the name). It’s soft, a little smoky and sharp, and usually bright red. 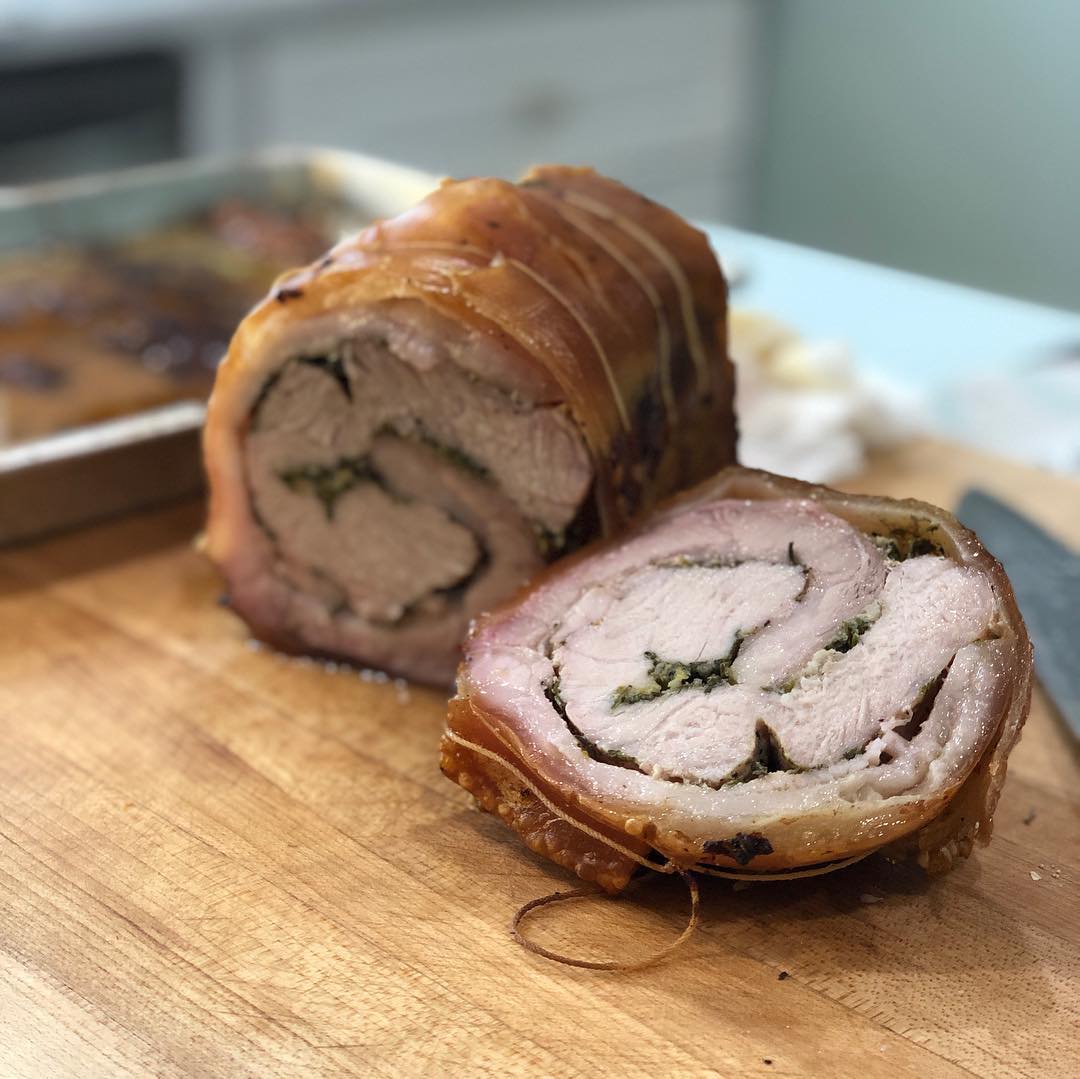 Porchetta is a boneless pork roast that’s salted and heavily spiced with garlic, fennel, oregano, rosemary and black pepper. It’s an excellent meat for a sandwich – it’s savory, fatty and moist. It’s prepared on a spit or roasted over wood for more than 8 hours.

Best Knife to Use: A long, thin slicing or boning knife

Prosciutto is probably the second- or third-most famous meat on our list, after pepperoni and salami. It’s silky, thin and sharp, with bright, salty flavor and a strong texture. It doesn’t hold for long once it’s sliced, so buy an appropriate amount. It’s made from the back leg of the pig and can come in two styles: cooked or uncooked. 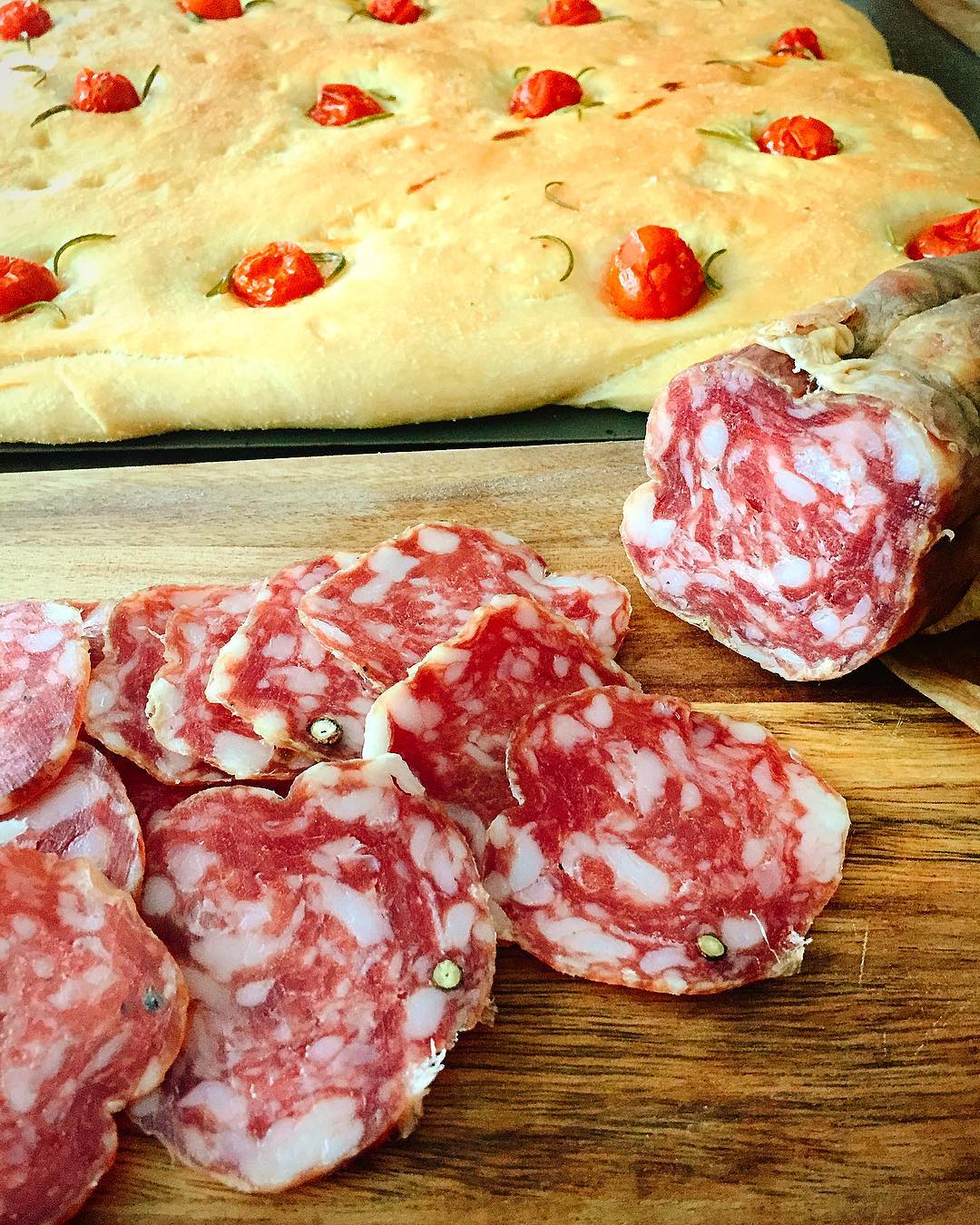 Salame is Italian Salami that’s made from cured pork or beef sausage, and mixed with ingredients like garlic, pepper and red wine. It’s also a type of meat that can be stored at room temperature for up to 40 days once cut, so it was very popular in the days before refrigerators. It’s marbled in appearance and has a savory flavor. 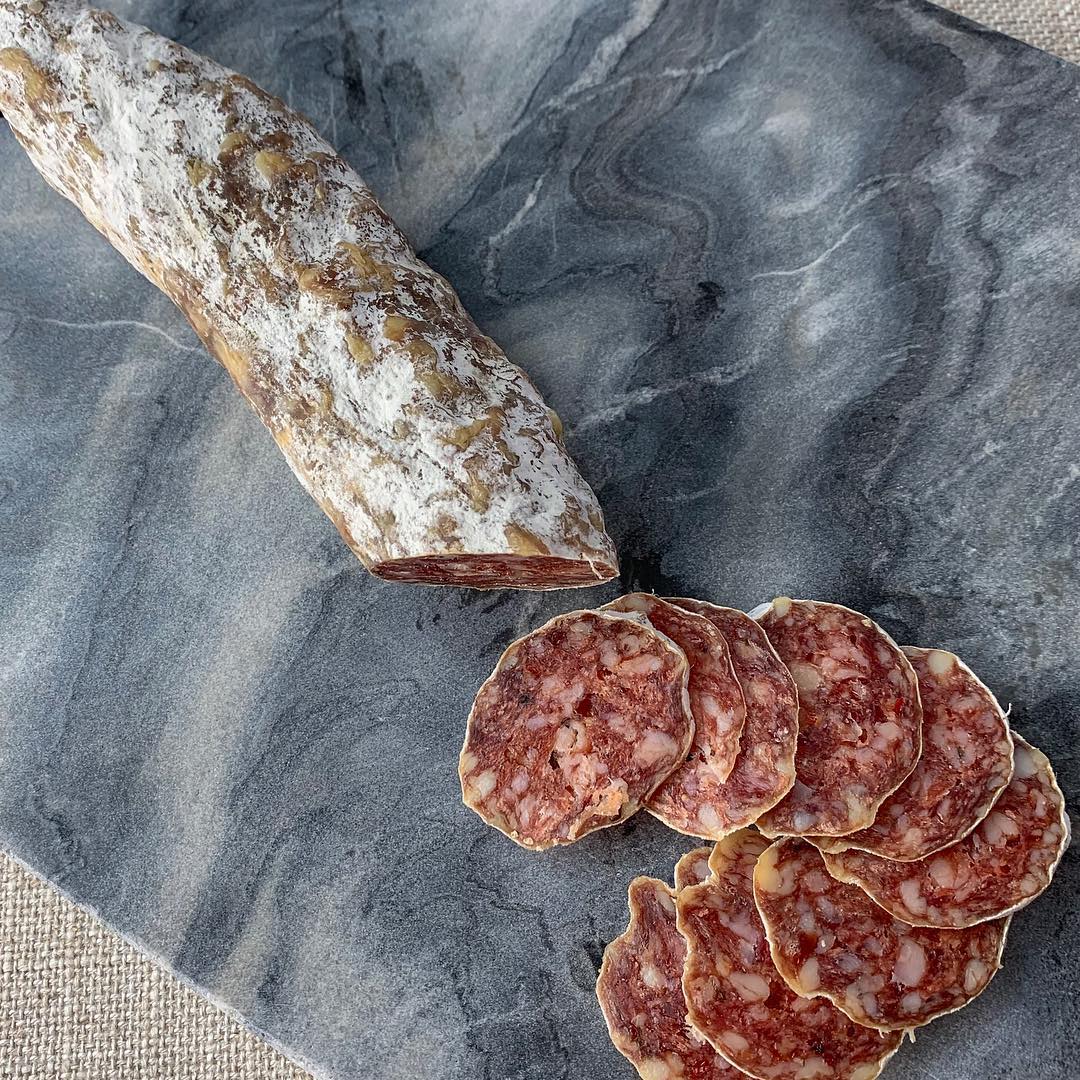 This is a dry-cured meat usually made from pork that’s coarsely pressed or grounded into a sausage. Flavors deviate depending on origin, but some pieces are leaner and others are made with hot pepper. The name comes from the Latin word for pressing, so it’s usually in a flat shape. The classic version of the meat was made from all the leftover parts of the pig and can actually refer to a number of coarse salamis. 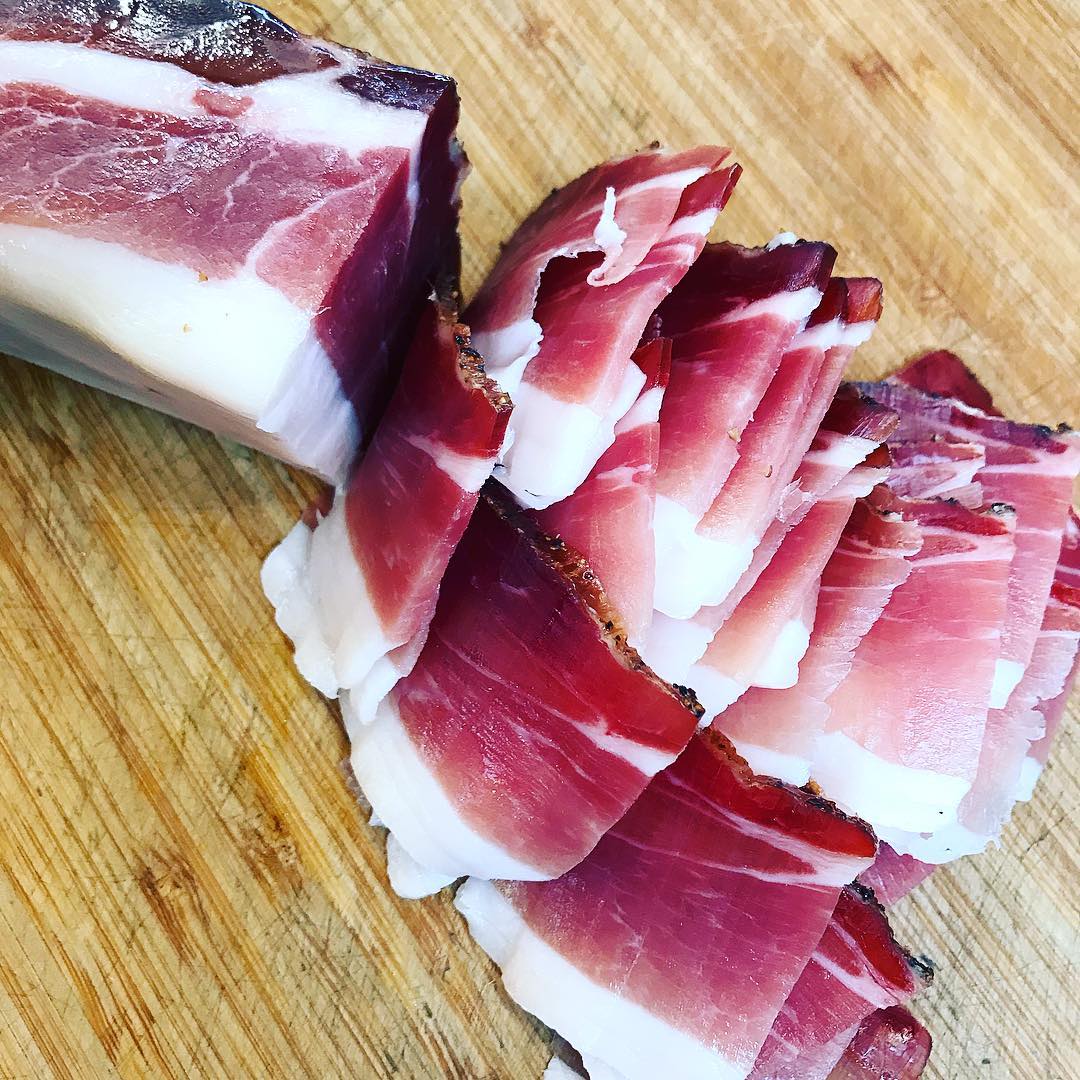 This meat is served in large slabs and it’s also known as specked ham. The term speck refers to meat that’s meant to last an extended period of time. It has a much lighter flavor than other Italian smoked hams, but it’s a bit more robust than prosciutto. It’s dry-cured for three weeks and then smoked gradually, over a period of some months.

All of these meats together on a board might be a little bit of an overkill, but we’re not here to tell you what to do, only to give options. With the knowledge of these Italian cured meats, we hope to inspire a charcuterie board unlike anything you’ve ever made before. And if you want to add a little bit of wine and cheese with your board, then check out our favorite Northern Italian wine and cheese pairings! Or, how about an offer you can’t refuse? Try enjoying your Italian cured meats with this classic cocktail that is served best cold: The Godfather.

Dive Into Greek Cuisine With This Greek Seafood Guide

Take a Mental Island Vacation With These Greek Drinks