In the world of performance cutlery, there are two types of chef knives that serve as multipurpose tools in the kitchen: the classic Western-style chef’s knife and the Japanese-style Santoku knife. While both chef knives are similar in purpose, they definitely have their differences, from shape and design to cutting styles and techniques.

The Santoku Knife vs. The Chef’s Knife: What’s the Difference?

As the most popular multipurpose kitchen knives, both the Santoku knife and the chef’s knife can be used for a variety of meal prepping tasks, from slicing meats and fish to chopping fruits and vegetables to mincing herbs and spices. However, the differences in design and the way each knife hits the cutting board require different knife skills and cutting techniques in order to use each knife to its fullest potential. For a better understanding of the differences and similarities between these two chef knives, let’s take a look at the specifications and uses for each.

What is a Chef’s Knife?

Often referred to as the most important tool in the kitchen, the Western-style chef’s knife comes with many uses in the kitchen. Designed specifically for the “pinch grip”, the double bevel blade measures anywhere between 8 and 12 inches long from the heel to the tip, while the cutting edge features a generous curve (known as the “belly”) and is designed for the rocking motion known in the culinary world as the “rock chop”. This technique involves anchoring the tip of your knife on the cutting board as you rock the knife up and down, using your guide hand (which should be in “claw position” with fingers curled under) to push the ingredient forward between each cut.

Different parts of the chef’s knife are used for different tasks as well. The heavy-duty heel of the blade is great cutting through thick slabs of meat and dense fruits and vegetables like squashes and melons, while the pointed tip is perfect for detailed work like scoring meat and trimming fat. Some chef’s also use the flat of the blade to gently crush ingredients like garlic.

Once you learn how to use different parts of the blade and master the skills needed to achieve different knife cuts, you’ll start breezing right through all of your slicing, dicing and mincing tasks just like the pros.

What is a Santoku Knife? 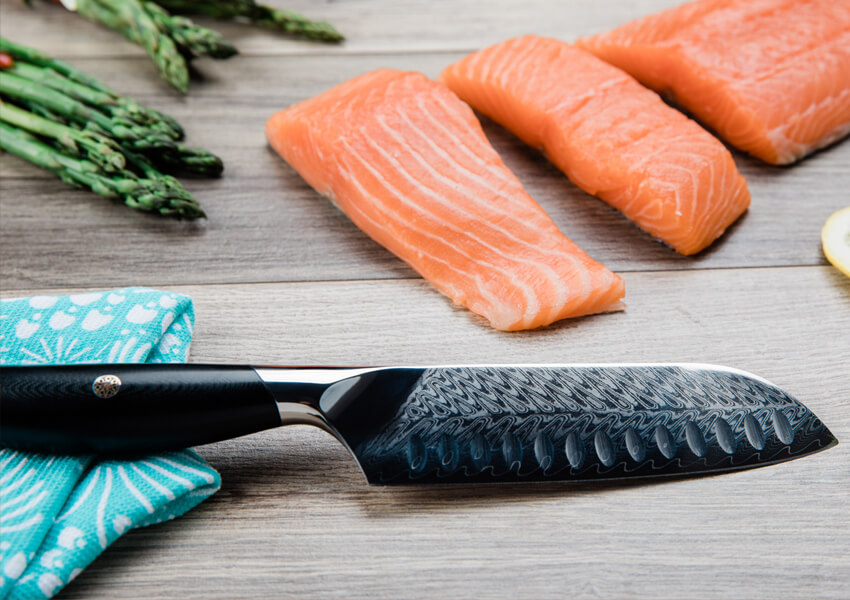 In the culinary world, Santoku translates as “three virtues” which is often used to define its three main uses: slicing, chopping, and mincing. Some chefs also say these three virtues refer to using three different parts of the blade – the main cutting edge for slicing, the heel for intense chopping, and the tip for detailed work – while others say it simply refers to its ability to cut meat, vegetables and fish. Whichever translation you prefer, the Santoku knife’s many uses make it a kitchen essential.

Crafted differently than the chef’s knife, the Santoku knife is lighter and smaller in size, with the most notable difference being the shape of the blade. Measuring between 6 and 7 inches long, the Santoku knife features a shorter, wider blade with a “flatter” cutting edge and curved tip versus the generous belly and pointed tip of the Western-style chef’s knife. This allows for more of an up-and-down chopping motion that requires lifting the blade off the cutting board between each cut (just think of that sound you hear when a chef is chopping through ingredients like a boss).

Knife Knowledge 101: The Best Cutting Board for Your Knives

Another notable trait is the “Granton” or “scalloped” edge, which features indentations that allow tiny air pockets to get between the blade and your ingredients to help prevent them from sticking between slices. This makes the Santoku knife the go-to tool for creating perfectly uniform slices of fish for sushi and sashimi and for finely mincing delicate herbs, while the width of the blade is great for scooping up ingredients – just be sure to use the spine of the blade and not the cutting edge to avoid dulling your blade, and check out these other tips for following the rules of kitchen knife safety.

Although Japanese style chef knives are traditionally sharpened on one side (single bevel), double bevel Santoku knives have become more popular over the years. For example, the F.N. Sharp Santoku knife captures some of the same traits as our Western-style chef’s knife, with a double bevel edge sharpened at a 50:50 ratio (13 degrees per side) and a slight curve to accommodate the rock chop technique.

When to Use a Santoku vs. a Chef’s Knife 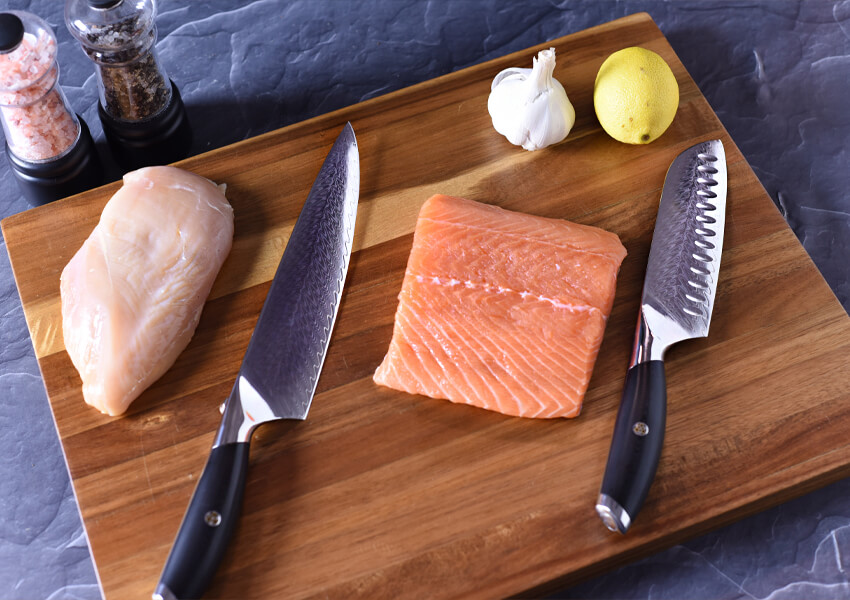 Many professional chefs and home cooks alike will use either knife interchangeably, but there really are some advantages to using one over the other.

The Western-style chef’s knife tends to be thicker and heavier, making it the workhorse for your kitchen, while the light-weight Japanese-style Santoku is perfect for fine, delicate slicing. Although both are considered multipurpose tools for slicing, dicing, and mincing fruits, vegetables and herbs, when it comes to the meats, the chef’s knife is more commonly used for cutting through thick cuts of meat and even bones, while the Santoku is the go-to for fish.

The chef’s knife may also be the right choice when cutting through dense ingredients like melons,  squashes and other fall vegetables, while the Santoku should be your go-to for recipes that call for thinly sliced and perfectly uniform ingredients (think ratatouille).

When it comes down to it, choosing between the chef’s knife and the Santoku can also be a matter of personal preference and chopping style. Smaller-handed people might prefer the way the Santoku feels in their hands as it’s light, smaller and has a certain ease of handling, while people with larger hands may prefer the chef’s knife due to its heft. Either way, both knives have their uses in the kitchen, making it a bonus when both are included in your kitchen knife set.