While your grocer’s meat case is probably filled with a variety of plastic-wrapped poultry cuts, being able to break down a bird yourself is a useful skill that will greatly increase your options in the kitchen. It will also save you money, since whole, unprocessed poultry are typically less expensive than prepackaged meat.

There is quite a variety of different types of poultry you may encounter, ranging from the most common – chicken, duck, turkey – to the more unusual, like quail, partridge, pheasant, and goose. The good thing is that, despite the variation in size and flavor, all of these birds can either be cooked whole or broken down into the same basic cuts.

How to Break Down Poultry into Different Cuts 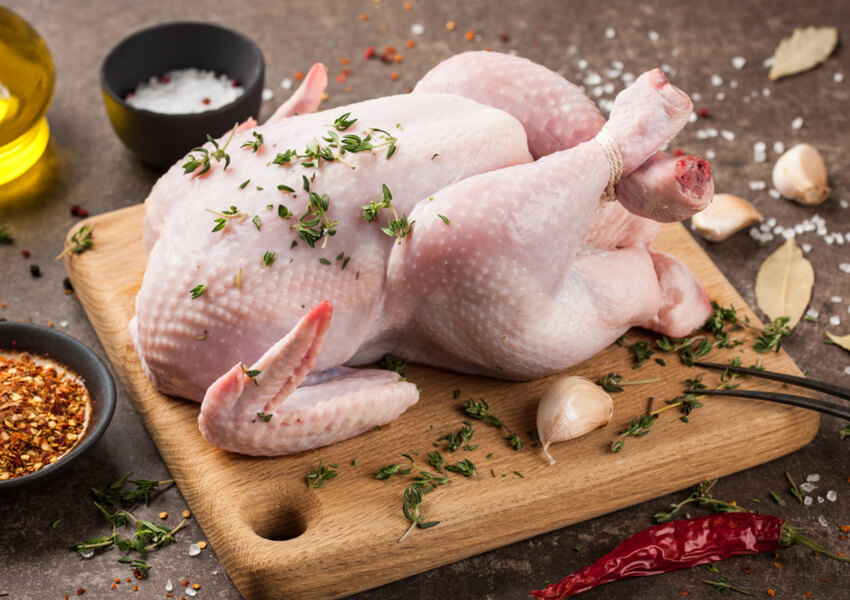 Poultry meat can be classified in two broad categories: white and dark. These are actually different types of muscle. Muscle groups that aren’t used for everyday activity get their energy differently than muscles in almost constant motion. This is why the breast and wings of domestic birds are white and their legs dark, while game birds, which have darker meat overall, may also have darker wing meat.

The main poultry cuts that are served up are the wings, breasts, legs, and thighs. Other pieces of the bird, such as the neck and ribs, can be separated out and used for making stock. When you’re ready to break down your bird, assemble your kitchen knives. At minimum, you’ll need a chef’s knife or utility knife, but a boning knife comes in handy, especially if you’re preparing boneless cuts. A pair of heavy-duty poultry shears is also a useful tool to have on hand, since they make quick work of snipping through, and removing, the ribs. 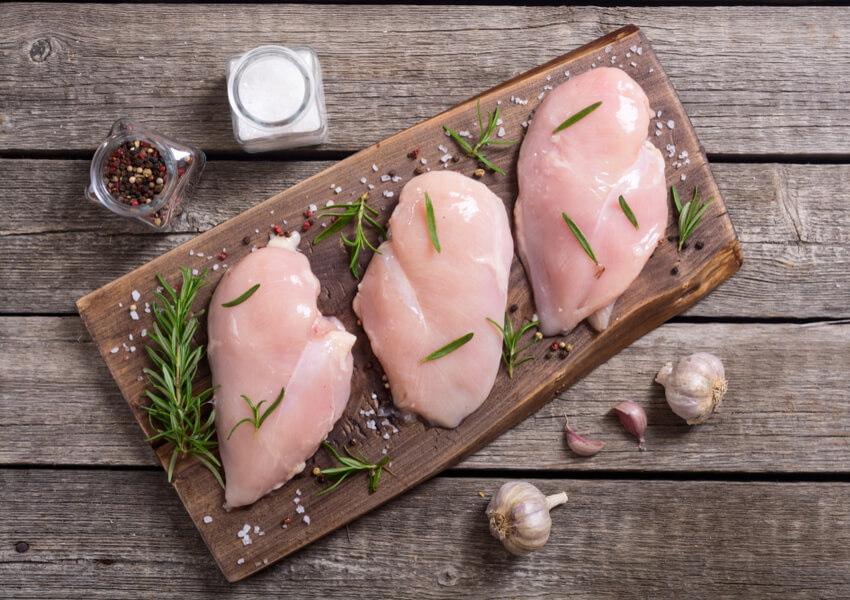 White, or light, meat comes from the breast and wings of poultry. It’s lower in fat and calories and milder in flavor than its dark meat counterpart, which makes it an excellent choice to combine with subtle flavor profiles. For more on flavor profiling, check out our guide to the basic elements of cooking.

To keep white meat from drying out during the cooking process, avoid dry heat and don’t be afraid to add a little fat. Herbed butter spread over the surface infuses flavor to white meat cuts, or opt for wrapping the breast and wings in bacon for an even more decadent dish.

More on Seasoning Poultry and Other Meats: The Meat Seasoning Guide

To separate the white meat cuts from a whole bird, first remove the legs at the hip joints using a chef’s or utility knife, then remove the lower ribs and spine using your poultry shears. This leaves you with the front half of the chicken, including both breasts and wings. If you want boneless breasts, use a boning knife to separate each breast from the ribs underneath. For bone-in cuts, simply split the breasts in half along the sternum. Use both hands to apply steady pressure to your knife to keep it from slipping as it cracks through the bone.

Unless you’ve opted for boneless breasts, what you’re left with at this point is two breasts with wings attached. The wings can be further broken down into the wing tip, the winglette – the section of wing between the wing tip and the “elbow” joint – and the wing drumette, which connects the winglette to the breast at the shoulder. You can remove the wings in their entirety or remove just the tip and winglette, leaving the drumette attached to the breast. This leaves you with a cut called a “supreme,” a fancier cut that’s hard to find in supermarkets and is typically associated with restaurant dishes. What easier way to impress your friends at your next dinner party than with fancy poultry cuts like these?

Impress Your Friends With This Recipe: Arroz con Pollo Made Easy in the Instant Pot

For dark meat, turn to the legs of the bird. Because most fowl do a lot of walking, these muscles are slightly different from the muscles of the breast. They’re richer in fat and minerals like iron, which gives them a slightly gamier taste and makes them excellent for robust dishes.

The two cuts of dark meat are the leg and the thigh. They are the first pieces to be removed when breaking down your bird into different cuts of poultry. With the bird on its back, trace through the skin and meat surrounding the hip bone with the tip of your chef’s knife or utility knife. The object of this is to reveal the joint.

None of the knives in a typical kitchen knife set are capable of handling leg bones as thick as those you’ll find in most poultry, so the easiest way to separate the dark meat cuts from the rest of the bird is by exposing and then popping apart the joints. Rotate the leg away from the bird until you feel the joint give, then use a boning knife or the tip of your chef’s knife to carefully separate any remaining connective tissue to remove the entire leg.

Drumsticks are a complex mass of small muscles, bone, and connective tissue, which makes it impractical to debone them. Thighs, on the other hand, can be quickly and easily skinned and deboned with a boning knife, leaving a tender cut of dark meat that can be used in much the same way as the breast. Try them in stir-fry and pasta dishes for a richer, more flavorful alternative to white meat cuts.

Try Chicken Thighs in the Instant Pot With This Recipe: Classic Butter Chicken

Breaking down poultry cuts may seem complex at first, but it really only takes a little practice to be able to take a whole bird and process it into exactly the cuts you prefer to work with. Since these skills translate easily from bird to bird, it doesn’t matter if you’re preparing a Christmas goose or a delicate quail – you’ll always know exactly how to handle it. Whether your goal is to hone your knife skills, impress your friends and family, or cut back on the grocery bill, learning how to break down different poultry into different cuts is a skill every home cook can use.

More on Poultry: How to Cut Up a Whole Chicken and How to Carve a Turkey
Share
Tweet
Pin1

The F.N. Sharp Guide to Cutting Up Those Veggies