Home › The Rockies › Local Eats: The Wild Game Dishes of the Rockies

Every corner of the world has a regional specialty that everyone recommends you “MUST” try before you leave. Fortunately for visitors to the Rocky Mountains, there are closer to a dozen specialties the region takes great pride in.

Unless you have an adventure palate, don’t let the locals trick you into trying Rocky Mountain oysters – yes, they really are bull testicles!

Instead, turn your focus to the variety of wild game that makes a presence on restaurant menus throughout the region. Whether you’re looking for a tamer introduction to game meat, or are ready to experience all that wild game dishes have to offer, you’ll find something new to fit your tastes.

Elk meat is an incredibly lean protein and is lower in fat than beef, pork, and chicken. Thanks to its similarities to beef, elk can be found as a common replacement in many beef dishes. Since elk are better suited than cattle to deal with cold weather and a limited foraging season, you’ll see more elk farms throughout the higher altitude areas of the Rockies.

Packed with nutrients, including vitamin B12, thiamine, phosphorus, vitamin B6, and zinc, elk meat is equally as nutritious as it is delicious. Its incredibly tender texture makes it ideal for the grill, and its minimal “gamey” taste makes it great for burgers or chili. 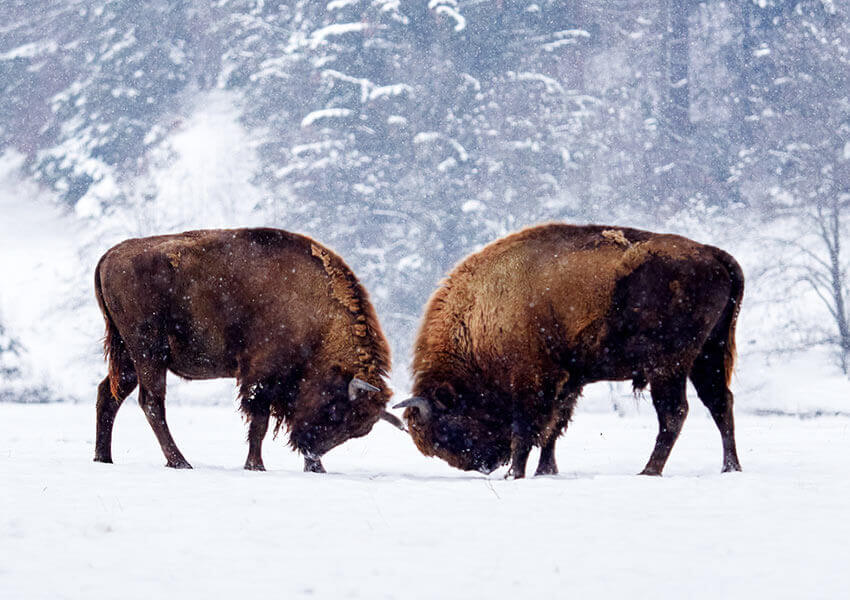 Up until about 150 years ago, the Rocky Mountains had a larger population of wild American bison, also known as buffalo, than the entire United States. Unfortunately, the mismanagement of the resource nearly led to extinction. But thanks in part to environmental protection groups, the buffalo has been making a return and now has a population of about 30,000 in the wild with another 500,000 being raised for agricultural purposes.

Over the last decade, bison meat has been making an appearance in supermarkets, but mostly in ground form as “bison burgers.” Bison is low in calories, fat, and cholesterol, yet contains more protein that beef, pork, or turkey. It’s even considered non-allergenic.

If you plan on experiencing bison for the first time during your visit to the Rockies, then be sure to order a buffalo tenderloin – you thought fillet mignon was tender? You’ll change your mind after experiencing this cut of meat!

Unless you know a hunter, wild boar probably hasn’t made it to your plate before. If pork is one of your favorite foods, then you’ll be in for a treat when you sample Rocky Mountain wild boar.

These pigs develop deeper-hued, more flavorful meat due to their free-range lifestyle and diets. Boars raised on a diet of acorns are considered some of the best tasting game you can find.

You’ll find wild boar in a variety of dishes throughout the Rockies, from most sausage and ragu to different cuts on the grill.

Since snowy mountains are usually the central focus of the Rocky Mountains, visitors may not realize all of that snow eventually melts and feeds a massive river and creek system that snakes throughout each mountain range.

Cold-water sport, or recreational, fishing is a multi-million dollar industry in itself, but these sport fish – namely trout – make for some of the best tasting table fare you’ll find anywhere seafood is served in the Rocky Mountains.

The most commonly served species of trout include cutthroat, rainbow, brown, and brook trout. Trout is one of the most sustainable fish found in the United States, and each state in the Rockies takes great care to monitor and replenish its populations at the end of each fishing season.

Most trout dishes gracing the menus of Rocky Mountain restaurants are either grilled or baked, and are accompanied by a variety of fresh mountain vegetables, along with a light sauce or dressing to complement the light and flakey taste of the trout.

The elusive wild mushroom draws hundreds of thousands of visitors and locals into the hills and forests of the Rocky Mountain region.

This type of hunting, a bit more docile than the tactics used to obtain other game species mentioned in this blog, can be incredibly rewarding both on your plate and in your wallet. Some species of wild mushrooms can fetch upwards of $75/pound from local restaurants and markets.

Menus throughout the region feature a variety of wild mushrooms, including porcinis, chanterelles, lactarius, and morels in uniquely prepared soups, salads, risottos, sauces, and more. These local wild mushrooms are the perfect complement to wild game dishes.

15 One Pot Meals to Make Eating Healthy Easier in 2020

How to Throw a Last-Minute Holiday Dinner Party